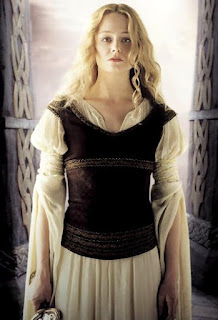 "All your words are but to say: you are a woman, and your part is in the house. But when the men have died in battle and honour, you have leave to be burned in the house, for the men will need it no more. But I am of the House of Eorl and not a serving-woman. I can ride and wield a blade, and I do not fear either pain or death."


Éowyn was the daughter of Théodwyn (sister of Théoden) and Éomund. At the age of seven, her father was slain by orcs. Her mother succumbed to her grief not long after, leaving Éowyn and her brother Éomer in the care of their uncle, Théoden, the King of Rohan, who raised them as though they were his own.

Throughout her youth, Éowyn cared for her ailing uncle Théoden, whose mind was poisoned by Grima Wormtongue, all the while longing for a chance to prove herself as more than just a woman of Rohan.

She fell in love with Aragorn when he arrived in Rohan, but he did not return her love, as his heart belonged to Arwen Úndomiel. She fell even deeper into despair when he refused to allow her to ride to war with him; her duty belonged with her people, whom she would have to lead in Théoden’s stead.

When the Rohirrim rode to Minas Tirith to fight in the Battle of the Pelennor Fields, she disguised herself as a man (Dernhelm) and rode with Meriadoc Brandybuck, who had also been ordered to remain behind. She won renown after she slew the Witch King, with Merry’s help. Her wounds were so great that when her brother Éomer found her, he thought she was dead. Prince Imrahil of Dol Amroth saw that she was alive, and she was taken to the Houses of Healing, where she was healed by Aragorn, and soon after met Faramir, Prince of Ithilien, through whom she realized that her love for Aragorn had been but hero worship. She and Faramir married shortly after (TA 3020), and together they had at least one child, for Tolkien mentions Éowyn having a grandson named Barahir (who wrote The Tale of Aragorn and Arwen), who may be the son of Elboron, whom Tolkien notes was the son of Faramir.

Tolkien makes no mention of Éowyn’s death, so it can be assumed she likely died naturally.

Éowyn's titles include the (White) Lady of Rohan, the Lady of Ithilien the Lady of Emyn Arnen, and the Lady of the Shield-arm (for her triumph over the Witch-king).

In the Rohirric language, which Tolkien based on Old English, eoh (or eh) means "war-horse, charger" while wyn means "delight, pleasure” – therefore, Éowyn can be said to mean “delightful (or joyful) charger.”

However, according to Tolkien, Éowyn was not her real name. Like Éomer and Éomund, her Rohirric name would have started with Lô- or Loh-, meaning "horse," which in Old English is represented as Eoh-.

Éowyn appears without dialogue in Ralph Bakshi’s 1978 adaptation of Lord of the Rings.
Nellie Bellflower provided the voice of Éowyn in the 1980 Rankin/Bass animated version of The Return of the King.

She was voiced by Elin Jenkins in BBC Radio's 1981 serialisation.

In Peter Jackson’s ‘Lord of the Rings’ adaptations, she is played by Australian actress Miranda Otto.
Posted: 6:03 PM