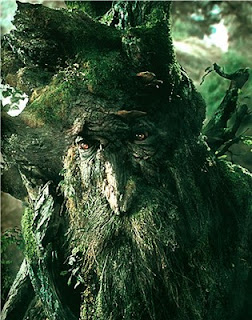 History of the Ents

Ents were a race of creatures in Middle-earth resembling trees. They were ancient shepherds of the forest and allies of the Free Peoples of Middle-earth during the War of the Ring. Ents appeared in Middle-earth at around the same time as the Elves. They were created by Eru Ilúvatar at Yavanna’s request, after she foresaw the Dwarves’ felling of trees and sought the creation of Shepherds of the Trees to protect the forests from many kinds of harm. The Elves taught the Ents to speak, a great gift that could not be forgotten. During the Third Age, Fangorn Forest was the only place known which the Ents still inhabited.

While Ents are long-living creatures, they are not immortal, like the Elves. They age very slowly with the passing of time, and while they do not die of old age, they may become “treeish,” settling down in one place and growing roots and leaves , until they cease consciousness and become trees permanently.

Entmaidens were young female Ents, who eventually grew into Entwives, the Ents’ mates. According to Treebeard, the Entwives began to move farther away from the Ents because they liked to plant and control things, whereas the Ents liked to let things take their natural course. The Entwives moved to the regions known as the Brown Lands, located across the Great River Anduin. Unlike the Ents, the Entwives interacted with Men and taught them much about the art of agriculture. The Entwives lived in peace until Sauron attacked and destroyed their region, the Entwives scattered into the wilds of Middle-earth, and became lost to the Ents (or so the Ents believed). The Elves sung that the Ents would one day be reunited with their Entwives.

Young Ents were called Entings; the loss of the Entwives prevented there from being any more Entings.

In The Two Towers, Tolkien describes Treebeard, the oldest of the Ents, as a “large Man-like, almost Troll-like, figure, at least fourteen foot high, very sturdy, with a tall head, and hardly any neck. Whether it was clad in stuff like green and grey bark, or whether that was its hide, was difficult to say. At any rate the arms, at a short distance from the trunk, were not wrinkled, but covered with a brown smooth skin. The large feet had seven toes each. The lower part of the long face was covered with a sweeping grey beard, bushy, almost twiggy at the roots, thin and mossy at the ends. But at the moment the hobbits noted little but the eyes. These deep eyes were now surveying them, slow and solemn, but very penetrating.”

Ents were tall and strong creatures, capable of tearing apart rock and stone (though they only use their full strength when roused). They share some of the strengths and weaknesses of trees. Their skin is tough, very much like wood. They can erode stone extremely rapidly, in the manner of tree roots; however, they are vulnerable to fire and chopping blows from axes. Ents were much more powerful than trolls, which Morgoth had created in mockery of the Ents.

There is a wide variation in the personal traits exhibited by the Ents (height, heft, colouring, even the number of digits), as they came to resemble the specific types of trees that they shepherded. Quickbeam, who guarded Rowan trees, bore some resemblance to rowans: he was tall and slender, smooth-skinned, with ruddy lips and grey-green hair.

“Enyd” is one of two plurals given in Elvish for the Ents; the other being “Onodrim” (“Ent-host”). Enyd typically refers to a smaller group of Ents.

Fangorn (Treebeard) -- Treebeard, along with Skinbark and Leaflock were the last remaining of the first Ents who appeared in Middle-earth. Fangorn Forest was named after Treebeard's Sindarin name.

Finglas (Leaflock) -- Covered in leafy hair, he had become sleepy and treeish during the War of the Ring.

Beechbone -- He was burned by Saruman's devices, a deed which greatly angered the Ents.

Bregalad (Quickbeam) -- A relatively young ("middle-aged") Ent at the time of the War of the Ring who guarded rowan trees. He received his name upon saying "yes" before another Ent had finished asking a question, which showed that he was unusually "hasty" for his race. During the Entmoot, he was the first to make the decision to attack Isengard. He played an important role in the attack on Isengard, nearly capturing Saruman himself.

Fimbrethil (Wandlimb) -- Treebeard's long-lost wife. The two were beloved before Morgoth first rose to power. At the time of the War of the Ring, Treebeard had not seen his wife in over 3,000 years.
Posted: 3:19 AM