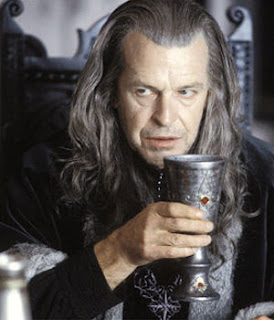 “… on a chair sat an old man gazing at his lap. In his hand was a white rod with a golden knob… Pippin saw his carven face with its proud bones and skin like ivory, and the long curved nose between the dark deep eyes; and he was reminded not so much of Boromir as of Aragorn.”

The eldest son of Ecthelion II, Denethor II (b. TA 2930) was the twenty-sixth and last ruling Steward of Gondor.  He married the much younger Finduilas of Dol Amroth (b. TA 2950), who was the daughter of Prince Adrahil II of Dol Amroth, in TA 2976, and they had two sons, Boromir (b. TA 2978) and Faramir (b. TA 2983). Following the birth of their second son, Finduilas began to grow weak, and Denethor ignored his youngest son, leaving Finduilas to raise him on her own.

In TA 2984, Denethor II succeeded his father as the ruling Steward of Gondor, and during this time, Gandalf’s welcome in Minas Tirith was reduced.

When Finduilas died in TA 2988 (at the age of 38, which was particularly young for a Dúnadan), Denethor began to fall into a depression. At around the same time, he began using a palantír (or seeing-stone) to obtain information regarding Sauron and his growing strength. Sauron used the Palantír to drive Denethor further into madness and despair, and when his beloved son Boromir died and he saw the overwhelming army of Mordor awaiting him outside Minas Tirith, he was driven to insanity.

On March 15, 3019, Denethor committed suicide by burning himself alive on a funeral pyre that had been prepared for him and Faramir, who had been presumed dead. However, Peregrin Took, with the aid of Beregond (a guard of the city) and Gandalf the White, intervened and rescued Faramir, who was not dead but gravely injured.

Upon Denethor’s death, the Stewardship passed to Faramir, although much of the command went to Prince Imrahil, as Faramir remained in the Houses of Healing for the remainder of the Battle of the Pelennor Fields.

In Rankin/Bass's 1980 animated adaptation of The Return of the King, Denethor was voiced by William Conrad.

He was voiced by Peter Vaughan in BBC Radio's 1981 serialisation.

In Peter Jackson’s adaptation of “The Lord of the Rings,” Denethor was played by John Noble.


Why was Denethor so mean to Faramir?

Denethor favoured his first son, Boromir, over Faramir. Denethor thought that Boromir showed more promise - he fit the image of the perfect soldier, whereas Faramir's interests were elsewhere. Boromir was loyal to Denethor, who thought that his other son was not. In addition to this, we know that Denethor's wife, Finduilas, grew weak after giving birth to Faramir, and Denethor ignored him from birth. It could be assumed that he resented Faramir and blamed him for Finduilas' weakness.


Denethor was really insane, wasn't he?

The films cast Denethor in a far more negative light than the books did; in the films, he was much more weak and inept at ruling over Gondor. In the books, he was a strong man who did everything he could to fight the armies of Mordor and defend his people from Sauron. To gain better knowledge of Sauron's plans, Denethor used the Palantír, which Sauron used in turn to drive Denethor mad, presumably by showing him just how great his forces were, and how futile Denethor's efforts seemed. Not only was his long-defended city falling, with seemingly no aid in sight; but he had lost his wife and favourite son Boromir, both of whom he loved more than anything else in the world. He was not "insane" - he was driven mad by despair. Unfortunately, the films don't give you enough of Denethor's back story, so in the few scenes that we do see him, he seems far more "crazy" than he ever really was.