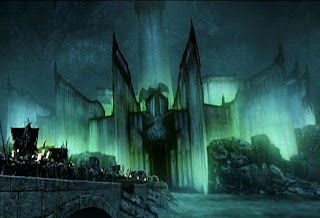 Minas Ithil (The Tower of the Moon) was built by Isildur on the eastern border of Gondor in order to keep watch on the neighboring land of Mordor. Minas Ithil was also called the Tower of the Rising Moon and the Moon-tower. During the early part of the Third Age, it was the sister city of Minas Arnor (later renamed Minas Tirith). Its full name is Minas Ithil in the Morgul Vale (named after the fortress' location).
Following the War of the Second Alliance in SA 3441, Minas Ithil became a lookout fortress for Gondor, and it was constantly manned and maintained. However, after the Great Plague came from the east and killed off many of the Men of Gondor in TA 1636, the guard on Mordor began to relax, until fell beasts slowly began to move in and take over control.
The Nazgûl returned to Mordor in TA 1980 to prepare for the return of Sauron. In TA 2000, the nine Nazgûl attacked Minas Ithil, and two years later captured and took over the fortress, renaming it Minas Morgul (The Tower of Sorcery), the Dead City.

The Ithil-stone (Palantír) which once stood in Minas Ithil was stolen by Sauron and later used to influence Denethor II during the War of the Ring.

After the War of the Ring, the bridge leading to the Morgul Vale was torn down by the Army of the West, and the fields were set afire. Now abandoned and uninhabitable by man, Minas Morgul fell into decay.
Etymology:
S. minas "tower" + morgul "black sorcery"
S. minas "tower" + ithil "moon"
Posted: 7:20 PM