My boyfriend and I took a lovely day trip to experience some of nature's breathtakingly beautiful sights yesterday, and he, being fascinated by my tattoo every time it shows itself, decided to take several pictures of it, with the intention of me posting some of them to my blog for everyone to see ("It's very Lord of the Rings!" he said of capturing my tattoo with some Middle-earthy sights in the background).

So I agreed. But then, of course, I didn't know what I was going to say about my tattoo. I wasn't going to just post a photo and leave it at that. 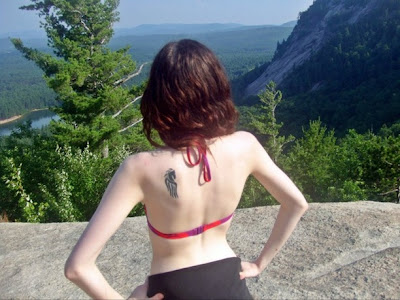 As I was going through photos, trying to decide which one(s) to use, I thought that perhaps the best thing would be to tell the story behind my tattoo. You know, the stuff everyone cares about...Although, in my case, I am rarely asked why I got my tattoo, or what it's supposed to signify. People seem to think, "She's got a horse tattooed on her shoulder blade. Cool; she must like horses."

Wrong and wrong. (Well, not wrong about it being a horse - you understand what I'm trying to get at.) I'll start by saying that I've been a fan of J.R.R. Tolkien (and all of his books) since I was about ten or eleven years old, and I've always been smitten with Rohan and its people. Upon seeing The Two Towers back in 2002, I was instantly drawn to the horse symbol which stood proudly on Rohan's flag. I have no great love of horses (which is not to say that I dislike them, either), but the horse represented a number of things.

First, it was something I would not mind permanently adding to my body. I'd thought about it, had this image in mind for over eight years before I actually went through with it. I knew there was zero chance of me ever getting sick of it, or of Tolkien and Middle-earth. It is a beautiful design, and at the time, fairly unique in the world of Tolkien-inspired tattoos. It looks sort of mythological, in a way: therefore, it also plays upon my love for mythological stores and ancient lore. Most importantly, it seemed to me to be one of those "you get it or you don't" kind of tattoos: hard core Tolkien fans would undoubtedly catch the reference, while people unfamiliar with either Tolkien or Peter Jackson's film adaptations would have absolutely no idea what it really was. To them, it's just a horse, and I'm just another silly girl with some sort of animal tattooed on her shoulder blade.

My tattoo artist didn't even ask about it. He did his job, and that was that. 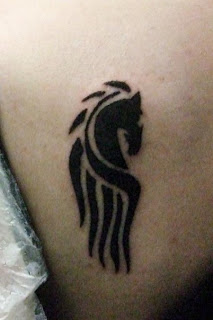 But now, when I'm among fellow geeks, all I have to do is whip out my tattoo, and people go crazy with excitement at the prospect of a chick being so geeky as to get the horse of Rohan tattooed on her shoulder blade. Some days I try to hide it, keep it all to myself. Some days I try to use it as a conversation starter. And some days, I feel like my boyfriend takes more pride in it than I do - like on days when he tugs and grabs at my clothing to get it out of the way of my tattoo, or like yesterday, when he decided he wanted to have a tattoo photoshoot. It's good to know at least one other person understands the importance of my tattoo.
Posted: 10:23 PM