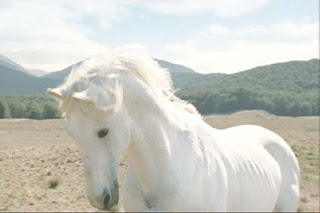 The mearas were the Horses of Rohan, descendants of Felaróf (one of the greatest horses to have ever lived, who also was said to have understood the speech of Men). They were the greatest horses of Rohan and of the rest of the world, and were extremely strong, swift, and intelligent, with a lifespan of about eighty years. The mearas would allow none but the King of the Mark or his sons to ride them (the only exception to this being Shadowfax, who was ridden by Gandalf during the War of the Ring).

The mearas were grey or white in colour, and were so beautiful that it was believed that Oromë brought the first meara to Middle-earth from Valinor.

Mearas comes from an Anglo-Saxon word for ‘horses.’ Mearh is its singular form, though that word is never used in The Lord of the Rings.

Fisher, M. (2001). Mearas. In Encyclopedia of Arda. Retrieved from http://www.glyphweb.com/arda/m/mearas.html