365 Days of Middle-earth ~ Day 45: The Two Trees of Valinor and the Line of the White Trees 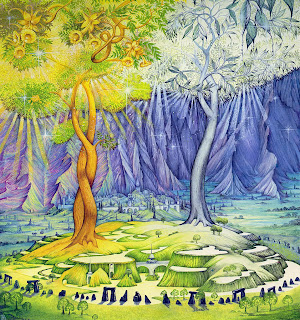 Q. ‘Silver–’ - Telperion (also called White Telperion, the White Tree, Ninquelótë, Silpion and other names, and Eldest of Trees) was the elder of the two trees, with leaves dark green above, and bright silver below, and a dew of light dripping from them. The stars of Varda were made from the dews of Telperion, and the Moon from his last silver flower. Galathilion and the line of the White Trees were images of Telperion, as was Turgon’s Belthil. It has been said that at the End, Telperion will reappear.

Q. ‘Gold-song’ - Laurelin (also called Culúrien, Malinalda, the Golden Tree, the Tree of Gold, and other names) was the younger of the Two Trees, with bright green leaves edged with gold, golden-yellow horn-shaped flowers, and her dew a golden rain.

History of the Trees

The Two Trees were created Yavanna’s song of power and the tears of Nienna, and were born when Valinor was fully established, growing on Ezellohar, outside the western gates of Valmar. Their light reached far, illuminating Valinor, Eldamar, and Tol Eressëa. Varda collected their dews in great vats known as the Wells of Varda.

They inspired reverence and wonder in the Eldar, as the Silmarils of Fëanor, greatest creation of the Children of Ilúvatar, captured the light of the trees. Melkor coveted this light, and with the help of Ungoliant, he poisoned the trees, drained the Wells, and stole the Silmarils. While Yavanna and Nienna could not heal the trees, their last fruit and flower were taken by the Valar and fashioned into the Moon and Sun.

Galathilion and the line of the White Trees

S. ‘White blossom’ - Nimloth (also called Nimloth the Fair) was the White Tree of Númenor, given to Elros by the Eldar of Tol Eressëa. It grew in the King’s Court, but following the reign of Ar-Gimilzôr, the tree was unattended to and began to decline, until it was cut down by Ar-Pharazôn (at Sauron’s request) and burned on the altar of his Temple. Isildur, however, had stolen a single fruit of Nimloth, which bore the White Tree of Gondor, thus preserving the line of the White Trees.

When Isildur escaped the capture of Minas Ithil, he took with him a sapling of the White Tree, and planted it in the citadel courtyard of Minas Arnor, in memory of his slain brother Anárion. This tree died in 1636 during the Great Plague.

King Tarondor planted another sapling in TA 1640. This tree lasted until the year 2872. By then, no seedling of the tree could be found, as it had rarely flowered after the line of the Kings had failed.  So it was left standing until the return of the King.

After Aragorn became King, he discovered a sapling of the White Tree on the slopes of Mindolluin, which he planted in the Court of the Fountain. The dead tree was placed in the Tombs of the King, and by June of TA 3019, the new sapling was already in blossom.

Fisher, M. (2008). Two Trees of Valinor. In Encyclopedia of Arda. Retrieved from http://www.glyphweb.com/arda/t/twotrees.html

Foster, R. (2001). In The complete guide to middle-earth: from the hobbit through the lord of the rings and beyond. New York: Del Rey.
Posted: 4:08 PM