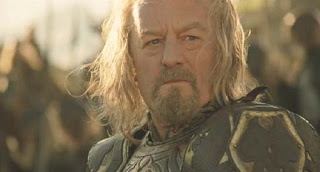 (TA 2948 – 3019) Théoden, son of Thengel, was the seventeenth King of Rohan (TA 2980 – 3019) and the last of the Second Line (the descendants of Fréaláf). Of the five children of King Thengel and his wife Morwen, Théoden, the second-born, was the only boy. He married Elfhild, who later died giving birth to their son Théodred. When his sister, Théodwyn (with whom he was very close), and her husband Éomund both died, Théoden adopted their children, Éowyn and Éomer.

A skilled horseman, Théoden was also a strong and highly respected king. Near the end of his reign, however, he fell into decay under the spell of Saruman (who had gained access to Théoden through his corrupt counsellor Gríma); but by the end of 3019, he had been healed by Gandalf, earning him the title Théoden Ednew (Rohirric: ‘renewed fortune’). Upon the death of his son, Théodred, his nephew, Éomer, became his heir.

Théoden led the Rohirrim against the forces of Saruman in the Battle of the Hornburg and against Mordor in the Battle of the Pelennor Fields. During the latter battle, he defeated an army of Haradrim, and then challenged the Lord of the Nazgûl, though he was mortally wounded when his horse Snowmane fell upon him.

After his death, he was succeeded by his nephew, Éomer.

Théoden is a translation of the Rohirric Tûrac (‘king’), which was influenced by the Sindarin stem tur- (‘power/mastery’)

Foster, R. (2001). Théoden. In The complete guide to middle-earth: from the hobbit through the lord of the rings and beyond. New York: Del Rey.
Posted: 9:33 PM