365 Days of Middle-earth ~ Day 49: Númenor and the Númenoreans


History of Númenor and the Dúnedain


The Dúnedain were Men descended from the Edain of the First Age who sailed to Númenor at the beginning of the Second Age. They made the island of Elenna their home in SA 32, having been granted Númenor by the Valar in reward for their faithfulness in the War of the Great Jewels.

Eventually the Dúnedain began to grow too proud and discontented with the gifts they had been given by the Eldar, and were also concerned with their short lifespan, and the imminence of death; to them, the Gift of Men was their Doom. These fears of death led to a desire for power and a reliance on treasures and luxury. By 2300, they began to speak openly against the Valar; only the Faithful remained loyal to the Eldar, and they were often persecuted for this.

Hoping to reclaim nobility and return to the older ways of life, Tar-Palantir found his reign undermined by civil war, and after his death in 3262, his nephew, Ar-Pharazôn claimed the throne, with a desire to gain kingship of the world. In 3262 he brought Sauron to Númenor as a prisoner, and not long after Númenor had been corrupted, with Sauron persuading Ar-Pharazôn to attack Valinor and demand immortality.

Númenor was destroyed in what was known as the Change of the World. Elendil and a small following of the Faithful came to Middle-earth; the Faithful and the Black Númenoreans of Umbar and Harad were the only Dúnedain left. The Faithful went on to found two kingdoms: Gondor and Arnor. Following the death of Elendil (SA 3441), the Dúnedain had been broken up into two groups: the Dúndain of the North and those of Gondor. 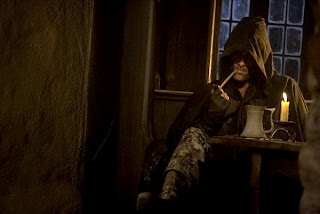 The Dúnedain were tall with dark hair and grey eyes. They were superior to other Men in terms of body in spirit, though they were not immune from evil and corruption, and they were forbidden to set foot on the Undying Lands or become immortal. Their lifespan was thrice that of lesser Men (210 years) originally, but by the War of the Ring it has been reduced to 150 years.

They primarily spoke Westron (the Dúnedain of Númenor spoke Adûnaic), though many of the Dúnedain also knew Sindarin and/or Quenya, and often enriched their own words with Elvish ones.

The Dúnedain of the North

The Dúnedain of the North were attacked by Angmar in TA 1300, which resulted in the slow dwindling of their numbers and territory; the last Dúnadain of Cardolan died in the Great Plague of 1636. The Dúnedain of the North saw their numbers dangerously reduced after the fall of Arthedain in 1974; they survived only with the help of Elrond. Most of these Dúnedain became Rangers who saw it as their duty to protect innocent Men and Hobbits against the forces of Sauron.

The Dúnedain of Gondor

Despite threats from Harad and Rhûn, the Dúnedain of Gondor initially flourished, though many of their leaders became too proud. The Line of Anárion (the family of the Kings of Gondor) failed several times due to lack of children or the early death of the king. Dúnadan blood had been lessened by intermarriage with lesser Men and the Dúnedain’s love of luxury and sloth-like natures. Despite this, some families still retained their nobility – such as the House of Húrin.

The singular form of Dúnedain is Dúnadan.


Foster, R. (2001). The complete guide to middle-earth: from the hobbit through the lord of the rings and beyond. New York: Del Rey.