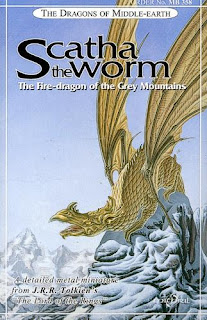 Scatha was one of the great dragons of the Third Age who dwelt in Ered Mithrin (the Grey Mountains). Little is known of Scatha, save that he was cruel and greedy, and possessed a large hoard of treasure forcibly taken from the Dwarves prior to their expulsion from Moria (TA 1981). He was slain by Fram son of Frumgar of the Men of Éothéod, who later found himself in a bitter dispute with the Dwarves, who claimed the treasure for their own. Fram insulted the Dwarves during the dispute by sending them the teeth of the dragon and saying, “Jewels such as these you will not match in your treasuries, for they are hard to come by,” which ignited war between the Dwarves and the Éothéod, and ultimately resulted in the Dwarves’ slaying of Fram.