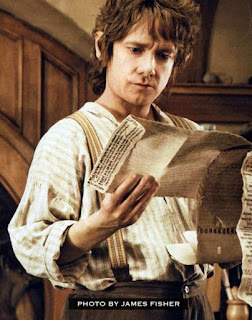 ‘Hobbit’ director Peter Jackson recently praised British actor Martin Freeman, who will be portraying the story’s main character, Bilbo Baggins, in The LA Times, stating that Freeman “is fantastic and there is simply nobody else for the job. We couldn’t find anyone who was better than him. He’s simply fantastic.”
Jackson also explained the reason behind the month long production break was to allow Freeman, who had already signed on to another Sherlock Holmes series, to fulfill his previous commitment to the BBC. Jackson, well aware of Freeman’s prior commitment, cast him as The Hobbit’s lead anyway.
“I can’t imagine anyone else doing Bilbo, which is one of the reasons, really, we signed him up even with having the Sherlock break – normally on a movie you wouldn’t want to do that with the schedule, but we literally couldn’t figure out any other actor we auditioned, you know. There is no other actor.”
So what did Jackson see in Freeman that stood out from all the other ‘Hobbit’ hopefuls?
“He’s Bilbo-esque,” Jackson said. “You might not always want to say that about you, right? But seriously he has the essential features of this little English gent, this country gent who is slightly old-fashioned and has to go around in the world and try to cope with it. That’s not exactly who Martin is as a person, but as an actor he does that so well. The fish out of water with a sense of courage but also a wonderful sense of humor. The things that happen to him and the way he reacts to them — things he’s never seen in his life before as a stuffy little Hobbit — his response to it all is part of the charm. And he does have a great openness in his face.”
Fans can see Martin Freeman’s portrayal of the hobbit Bilbo Baggins in The Hobbit: An Unexpected Journey, the first installment of the two-part adaptation, which opens on December 14, 2012. The second part, The Hobbit: There and Back Again, is scheduled for release on December 13, 2013.
Posted: 11:08 PM