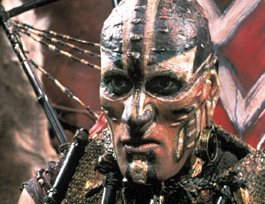 The Men of Harad (the lands south of the River Harnen) were a primitive group of men who, though they paid some tribute to Númenor during the Second Age, were influenced by Sauron in later Ages, and thus remained a threat to the southern borders of Gondor for over two thousand years. They were ruled by the Black Númenoreans. Additionally, from the 19th Century of the Third Age and on, the Corsairs of Umbar were Haradrim.

Hostilities Between Gondor and the Haradrim

The hostility between the Men of Gondor and the Men of Harad stemmed from the possession of Umbar, which had traditionally been Black Númenorean land until it was seized by Gondor in the 10th Century of the Third Age. In TA 1015, the Haradrim attacked Umbar, slew Ciryandil, King of Gondor and capitalized the Havens as well as the City of Umbar. Many of the besieged Dúnedain held out, until King Ciryaher so greatly defeated the Southrons that they did not dare attack again for several hundreds of years afterward; thus, the land between the Poros and the Harnen fell under the rule of Gondor.

However, Gondor’s grip on the Harad slowly began to loosen, until they lost control of Umbar in 1448. By 1944, the Haradrim had formed an alliance with an Easterling group of people (known as the Wainriders), and Gondor was eventually forced to evacuate the land of Harondor.

During the War of the Ring, the Haradrim fought for Sauron at the Battle of the Pelennor Fields, though they were once again defeated by the armies of Gondor. In the first decades of the Fourth Age, there was still much fighting along the Harnen.

The Haradrim used a variety of weapons in battle, and were well-known for their use of mûmakil (Oliphaunts).  Haradrim soldiers were armed with spears and shields, helms and scimitars, all of which were adorned with gold and much ornament.

As a result of the bright Sun bearing down on the lands in which they lived, the Haradrim were darker-skinned than the Dúnedain of Gondor; they were also very tall, with black hair and eyes.

They were fond of bright clothing and ornaments, and many Haradrim tribes were known to have painted their bodies.

In Westron, they were known as Southerns and Southrons; they were also known as Swertings and Swarthy Men (by hobbits).
Posted: 7:59 PM