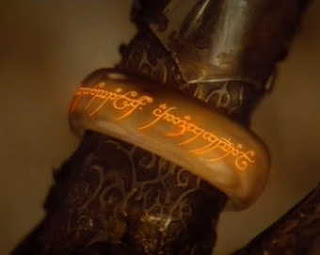 In the Second Age, Sauron devised a language to be used by him and his servants. It was a very harsh sounding language, perhaps a perversion of the Quenya language. By the end of the Second Age (following the first overthrow of Sauron), the language had died out, as many of his servants were unable to grasp the concept of his language, save the Ringwraiths. Sauron reintroduced the language during the Third Age, but this time, only Sauron, the Nazgûl, the Ologhai, and other close servants of the Enemy spoke the pure form of the language; the Orcs of Mordor spoke a crude version of the Black Speech, which was often reflected in their names.

The only example of pure Black Speech is the inscription on the One Ring:

Some other words in the Black Speech:

In the films, linguist David Salo constructed two phrases in the Black Speech, based on what little words and information have been provided: