The Three Rings refer to the Elven Rings of Power – Vilya, the Ring of Airs; Nenya, the Ring of Waters; and Narya, the Ring of Fire. These Rings were crafted during the Second Age by Celebrimor of the Noldor and the Elvensmiths of Eregion. They were wrought without Sauron’s assistance – they were made for the purpose of understanding and healing – and as such, they were not tainted or sullied by his hand. However, they were not immune to the control of the One Ring, which would reveal the wielder of each Ring to Sauron if he possessed the One Ring.

Throughout the Second Age, the Three were successfully hidden from the Enemy; in the Third Age, they were used in secret. But upon the destruction of the One Ring, the power of the Three failed, and all things wrought with them failed. They were taken (with their Keepers) to the West at the end of the Third Age.

Vilya, the Ring of Airs (also known as the Blue Ring), was the mightiest of all. It was originally possessed by Gil-galad, who passed it on to Elrond at the end of the Second Age. It was a golden ring set with a blue sapphire. 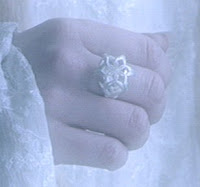 Nenya, the Ring of Waters, was always kept by Galadriel. Its stone was a white of great beauty; as such, it was sometimes referred to as the Ring of Adamant.

Narya, the Ring of Fire, was borne by Círdan the Shipwright until the end of the first millennium of the Third Age, when it was then surrendered to Gandalf, who wore it for the remainder of the Age in pursuit of his task of uniting the Free Peoples against Sauron, the Lord of the Rings. Narya was set with a ruby.
Posted: 11:49 AM