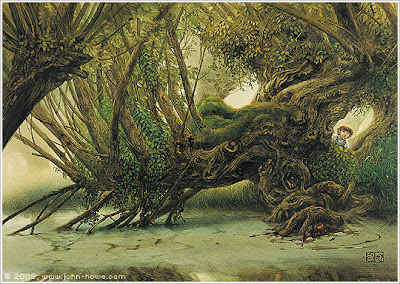 The Old Forest lay east of the Shire, between Buckland and the Barrow-downs. It was a remnant of the great forests which covered most of Eriador, and only the forest of Fangorn was comparable in age. Most of the other forests had been destroyed by the Númenoreans.

The trees in the Old Forest were mobile and did not take kindly to strangers travelling through. Upon the four hobbits’ departure from Crickhollow, Merry warned that the trees were hostile and seemed to be aware of everything that moved through the forest. Along the way, the hobbits noticed that the trees seemed to be blocking their path through the forest, forcing them to go southeast - and deeper into the heart of the forest.

When they stopped to have a rest, they found themselves under attack: Frodo claimed to have been pushed into the river, while Merry and Pippin were enclosed in the trunk of a tree. Tom Bombadil, who lived just outside the eastern end of the forest, on the bank of the Withywindle (and who had dominion over the forest), came to the hobbits' rescue and ordered the tree - known as Old Man Willow - to release the hobbits; Old Man Willow complies, and the hobbits manage to exit the Old Forest unscathed.

Foster, R. (2001). The Old Forest. In The complete guide to middle-earth: from the hobbit through the lord of the rings and beyond. New York: Del Rey.