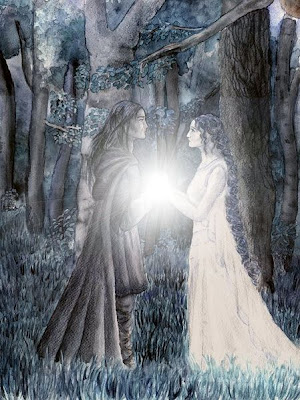 Melian was a Maia of Valinor, where she served Vána and Estë and tended to the trees of Lórien. She came to Middle-earth in the Elder Days, and in the secret woods of Nan Elmoth in Beleriand, Elwë, one of the Telerin Elves, heard her singing and the two fell in love. Out of love, Melian took on a human form, and the two founded the kingdom of Doriath. Elwë became the King of Elves in mortal lands, and Melian protected the kingdom with both her wisdom and the Girdle of Melian.
Melian bore Elwë a daughter, Lúthien Tinúviel, who inherited not only her mother’s singing voice, but also her beauty and divine lineage. Melian and Elwë stayed in Beleriand for the remainder of the Age, but Thingol was ultimately murdered. In her grief, Melian withdrew her power from Doriath, abandoned her body, and passed into the West, never again leaving the Gardens of Lórien.
Etymology
Melian is Sindarin for ‘Beloved’; from the Quenya Melyanna - ‘Love-gift’
Posted: 7:16 PM