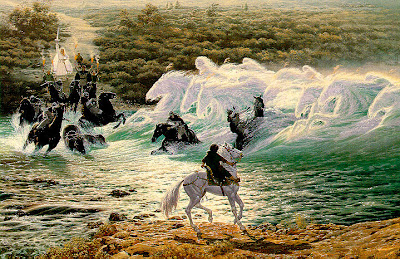 Also called the Ford of Rivendell. Here, the Great East Road crossed the river Loudwater (Bruinen), which was under the power of an Elven-lord (Elrond) and could rise (under his command) to bar passage across the Ford.

In TA 3018, Frodo and his companions were attacked by Nazgúl on their way to Rivendell; the Black Riders were driven off by Aragorn, Glorfindel, and a great flood in the form of horses created by Elrond. (In Peter Jackson’s film, Glorfindel’s role is taken by Arwen, who rescues Frodo, and unleashes a great flood upon the Nazgúl.)
Posted: 11:59 AM