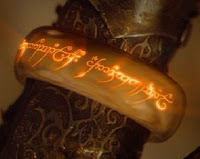 The One Ring was the greatest of the Rings of Power; it was crafted in secret in the fires of Orodruin by Sauron, whose intent was to have dominion over all of the other Rings. Through the One Ring, he was able to corrupt the bearers of the Nine Rings; Celebrimor, however, knew of Sauron’s ill intent, and managed to keep the Three Rings free of his influence.

The One Ring was a plain gold band, with a finely engraved inscription that could only be revealed through heat. Purely evil, the Ring seemed to have a will of its own; Gandalf claimed that it had wanted to be found by Bilbo, and it always sought to return to its master. The Ring exhausted those who possessed it, unless they were (like Sauron) of great power; those who were of little power found that the Ring made them invisible, and heightened their senses of sight and hearing. The Ring extended the lifespan of its master, who was physically changed by it, and who found themselves enslaved by it. The Ring made them jealous, greedy, and distrustful of others.

In SA 3441, Isildur took the One Ring from Sauron, whose hand he cut off in battle. Instead of destroying the Ring, Isildur kept it until it betrayed him, slipping from his finger during the Battle of Gladden Fields and revealing him to the Orcs, who shot and killed him. The Ring remained lost in the Anduin until TA 2463, when it was found by Déagol. His cousin, Sméagol (later known as Gollum) murdered him for the Ring, and after being exiled by his relatives, made his way into the Misty Mountains, where he remained for five hundred years. In TA 2941, Gollum lost the Ring, which was then picked up by the Hobbit Bilbo Baggins during the Quest for Erebor. In TA 3001, Frodo inherited the Ring from Bilbo, and later embarked on a journey to destroy the Ring in the fires of Mount Doom. This task was accomplished in TA 3019; and the destruction of the One Ring prevented Sauron from ever taking shape again.