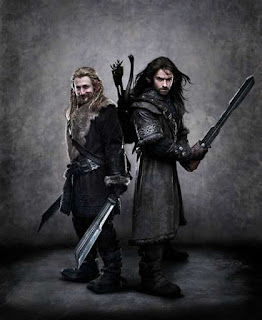 Fíli (b. TA 2859) and Kíli (b. TA 2864) were the Dwarf-sons of Dís. They accompanied their uncle, Thorin Oakenshield, on the Quest for Erebor, and later fought alongside him in the Battle of Five Armies (TA 2941), in which they were both slain defending their uncle from Orcs.

Fíli and Kíli were the youngest of the Dwarves in Thorin’s Company, and as such, were frequently used as scouts. Fíli was also known to have had the longest nose of any of the Dwarves on the quest.

In Peter Jackson’s adaptation of The Hobbit, Fíli and Kíli will be played by Dean O'Gorman and Aidan Turner, respectively.
Posted: 8:15 AM