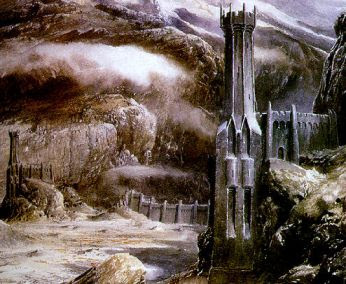 After the downfall of Sauron at the end of the Second Age, Gondor built two towers on either side of Cirith Gorgor (the Haunted Pass) to guard Mordor and prevent entry to the Black Land: they were called Narchost (S. ‘Fire-fort’) and Carchost (S. ‘Fang-fort’).  By about TA 1636, they had been deserted, and were soon reoccupied by Sauron. The towers (also known as the Teeth of Mordor) became Orc-holds, though they were ruined with the unmaking of the One Ring at the end of the Third Age.
Posted: 1:20 PM