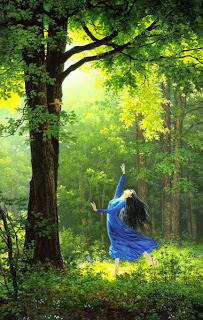 Lúthien was the daughter of Thingol and Melian, and the most beautiful of the Children of Ilúvatar. Born at the end of the First Age during the Chaining of Melkor, she spent many years of her life dancing in the forest to songs composed by the minstrel Daeron.
In FA 465, Beren found her in the woods and was enchanted by her beauty. He called her Tinúviel (Nightengale). The two fell in love, and though torn between her love for Beren and obedience towards her father, Lúthien chose the Gift of Men – a life of mortality with Beren. Thingol, displeased with his daughter’s choice, sent Beren on the seemingly impossible Quest of the Silmaril.
Darkness fell upon Lúthien’s heart, and when she learned that Beren had been captured by Sauron, she set out to rescue him. Despite being betrayed to her father by Daeron, who also loved her, Lúthien, with the hound Huan at her side, eventually made it to Tol-in-Gaurhoth, where she defeated Sauron and freed Beren. She then accompanied him to Angband, using her spells to enchant both Carcharoth and Morgoth, allowing Beren to cut a Silmaril from the Iron Crown.
Lúthien spirit broke following the slaying of Beren in the Hunting of the Wolf; going to Mandos in the Houses of the Dead, Lúthien sang to him. He was so moved by her song that she was offered a new life: she again chose to live a mortal life with Beren.
The two lovers returned to Middle-earth, where Lúthien bore him one son, Dior. For forty years they lived in Tol Galen. Though their bodies died a second time, the line of Lúthien never failed: Dior’s daughter Elwin wedded Eärendil; of their two sons, Elros and Elrond, Aragorn was a descendant of the former, while the latter was the father of Arwen Undómiel who, like Lúthien, forsook her immortality for the love of a Man.
Posted: 8:46 PM