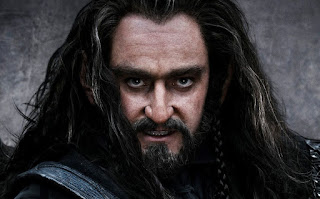 Thorin II (b. TA 2746) was a Dwarf, and from 2845-2941 the King of Durin’s Folk in exile and, briefly, the King Under the Mountain (2941). He fought in the Battle of Azanulbizar (he was called Oakenshield as a result of the oak-branch which he used as a shield and club during this battle), and after that went with his father, Thráin II to the Ered Luin.
When Thráin was captured by Sauron in 2845, Thorin became the King, and for a hundred years, slowly increased the number and wealth of his people; by 2941, he met Gandalf and at that point decided to reclaim Erebor from the dragon Smaug. Although their expedition was successful, Thorin was slain in the Battle of Five Armies (TA 2941). He was succeeded by Dáin Ironfoot.
Posted: 9:12 PM