Joe Letteri on the Evolution of Gollum 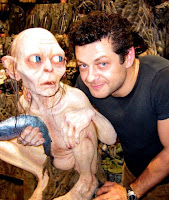 In a recent interview with MovieWeb.com, senior visual effects supervisor Joe Latteri  talked about his collaborations with actor Andy Serkis, who recently brought to life the ape Caesar in Rise of the Planet of the Apes, and who is reprising his role as Gollum for The Hobbit: There and Back Again.

“Without getting into what he is going to look like on screen, and everything, because we are saving that...Technically, what has been good about this, is that we did Gollum the first time around, and it was the first time that we were doing performance capture in a film,” Letteri said. “But we couldn't record on the stage. Andy was performing with all of the other actors. But then he would have to come out, and do his performance again on a motion capture stage. We would fit the two together. He would mimic his first performance, and we would put it in with the other actors.”

“When we did Avatar, we created this whole virtual world. It was completely immersive, and everything was in this virtual world. What we did with Rise of the Planet of the Apes was come full circle with it. We took all of the technology we created for Avatar, and we figured out a way to make that on set. How to make it work within exterior sets. That way, Andy could be in the scene with all of the other actors. So you're not getting a second performance from him, trying to duplicate the first. You are getting the performance that he did with James Franco and Freida Pinto, and everyone else.”

“It closed the gap for us, to have Andy be right there in the movie, and have that be his performance. That's the thing we finally got to do with Gollum. Just as a way of nicely closing the circle.”

The Hobbit: There and Back Again will be in theatres on December 13, 2013, and Serkis and Letteri will collaborate yet again to work on Rise of the Planet of the Apes 2, which is scheduled to hit theatres in 2015.
Posted: 8:01 PM