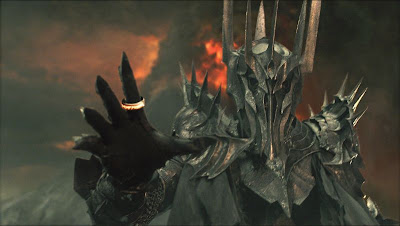 Sauron (Q. ‘Abominable’) was an Ainu and one of the Maiar of Aulë. Early in the First Age, he was seduced by Melkor becoming his chief servant, and later the self-styled ruler of Middle-earth.

According to several notes by Tolkien, Sauron’s original name was Mairon. In the beginning, he served the Vala Aulë, from whom he learned great craft. Soon after, he was seduced by Melkor and renamed Sauron; and when the original Dark Lord began stirring Evil in Arda (long before the Elves had awoken in Cuiviénen), Sauron was already his most powerful and accomplished servant. But where Melkor desired to mar and destroy Arda, Sauron sought dominance over the will of its inhabitants.

When Morgoth left Angband to corrupt the newly awakened Men, Sauron directed the war on the Elves. His armies of werewolves and Orcs captured the tower of Minas Tirith, which had been built by Finrod, and the island of Tol Sirion on which the tower lay was renamed Tol-in-Gaurhoth (‘Isle of Werewolves’); here Sauron dwelt as the Lieutenant of Morgoth.  Here he was slain by Lúthien and Huan the Hound, who had come to Tol-in-Gaurhoth to rescue Beren.

After the coming of the Host of the Valar, the destruction upon Morgoth and his forces was so great that the Eldar believed Evil had been ended for ever; yet somehow, Sauron managed to survive the Breaking of Thangorodrim. When he was summoned by Eonwë to be judged for his crimes, Sauron refused and fled.

The Second Age and the Forging of the Rings of Power

Sauron reappeared about 500 years into the Second Age.  Though his appearance was terrible, Sauron could still appear fair in form; treachery and deceit were his chief weapons. Many of the names he took signified reverence with Aulë; by SA 1500, he called himself the Annatar, ‘Lord of Gifts.’ Though many of the Elves – such as Gil-galad and Galadriel – were distrustful of Sauron, a few did listen to him: when approached by Sauron, Celebrimor of Eregion, the greatest surviving craftsman, agreed to deal with him, each providing the other with knowledge; it was they who formed the Rings of Power together. In secret, he wrought the One Ring, which would rule over the other Rings of Power, as long as their owners wore them.

By the time his true nature was revealed and the Elves brought war upon him, it was too late: so great was his strength that Eregion was overrun and Celebrimor slain, and of the Rings of Power, the Seven and Nine were reclaimed. The Edain of Númenor renewed their alliance with the Elves, thus gaining the hatred of Sauron, who was forced to withdraw from Eriador. He then began to occupy a volcanic wasteland, which he called the ‘Black-Land’ of Mordor.

The Downfall of Númenor

With the island realm of Númenor growing in power, Sauron sent fleets to attack; but the forces of Ar-Pharazôn were so great that again, Sauron was defeated. However, he perceived that King was a vain man: and so he humbled himself, appealing to Pharazôn. The King brought him back to Númenor as a prisoner, and Sauron quickly became his chief counsellor. During this time, evil sacrifices were made to Sauron’s former Master, and the name Morgoth was spoken in admiration. After less than fifty years in captivity, Sauron persuaded Ar-Pharazôn to assemble the Great Armament and wage war on the Undying Lands (SA 3319).

In the Downfall of Númenor, Sauron’s mortal body was destroyed, but his surviving spirit returned to Middle-earth, filled with a vengeance. He could no longer appear in a pleasing form; instead, he became the Dark Lord, a single lidless Eye. When he learned of a remnant of the Númenoreans were building realms-in-exile upon his borders, he immediately struck. But his enemies, whom he had again underestimated, took up an alliance against him, laying siege upon the Dark Tower. In a final battle with Gil-galad and Elendil, Sauron was defeated, and the One Ring taken from him. 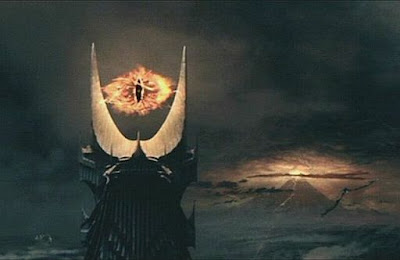 Sauron was too weak to recapture Mordor at the start of the Third Age; instead, he raised a smaller fortress, Dol Guldur, on a hill in Greenwood the Great (which he renamed Mirkwood). Orcs and Trolls began appearing in large numbers, and the power of ‘the Necromancer’ lingered over the forest. Still too weak to attack his enemies, he sent his chief servant, the Lord of the Nazgûl, to destroy the North-kingdom. After the subsequent weakening of the South-kingdom, Mordor was reoccupied by the Nazgûl.

While the Wise debated whether or not Sauron had awakened, the Dark Lord himself shifted his attention to reclaiming the Ruling Ring. Driven from Dol Guldur, he openly returned to Mordor. This time, however, he refused to attack his foes until he had the Ring. As he hesitated, his enemies campaigned against him, and ultimately his plans and armies were destroyed, the Dark Tower fell, and the Ruling Ring was destroyed in the Fires of Mount Doom. Sauron was cast into the Void for ever and the World lifted of the fear of his dominion.

Other Names and Titles

The High-Elves named him Sauron ‘the Abhorred,’ while the Grey-Elves knew him as Gorthaur ‘the Cruel.’

He was also known as: Sauron the Deceiver, the Lord of the Earth, Black Master of the Land of Mordor, the Enemy, the Master, Enemy of the Free Peoples, Eye of the Dark Tower, Seducer, Betrayer and Shadow of Despair, the Dark Lord, the Dark Power, the Black One, the Lord of Barad-dûr, the Lord of the Rings of Power, the Lidless Eye, the Evil Eye, the Nameless One, the Nameless Eye, He or Him, the Ringmaker; and he was referred to as the Black Hand by Gollum.
Posted: 11:42 AM