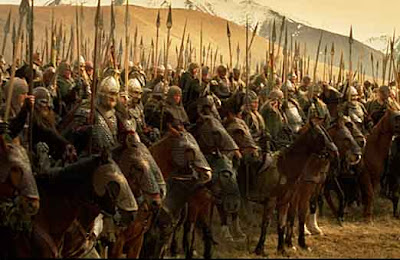 The Rohirrim (S. ‘horse-lord people’ or ‘Masters of horses’) were the Riders of Rohan, descended from the Éothéod. As a result of their nobility and the Oath of Eorl, they were friendly to Gondor and aided her against her enemies.

The Rohirrim, who referred to themselves as the Eorlingas (Rohirric: ‘sons of Eorl’) were tall, blond, and fair-faced. They generally lived to about eighty, and even in old age their strength was great. Known for being the best horsemen in all of Middle-earth, the Rohirrim valued their horses above everything else. Their official language, which many of them spoke even into the Fourth Age, was Rohirric, a language which was possibly descended from Adûnaic and thus closely related to Westron.

The Rohirrim were also known as the Horse-Lords, the Horse-men, the Sons of Eorl, the Horsemen of the North, Forgoil (by the Dunlendings), the Whiteskins (by Orcs), the Riders, and the North-men.
Posted: 2:52 PM