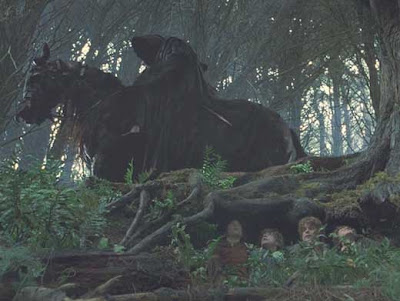 Khamûl, also known as the Black Easterling or the Shadow of the East, was once a King of the Easterlings. After being given one of the Nine Rings, he became the second-in-command of the Nine Ringwraiths and the only one whose name was ever mentioned in records. During the latter part of the Third Age, he occupied Dol Guldûr in Sauron’s name; at the beginning of the War of the Ring, he was sent to hunt for the One Ring in the Shire. It was he who pursued the Hobbits from Hobbiton and spoke with Hamfast Gamgee. After the Lord of the Nazgûl, Khamûl was said to be the most perceptive of the presence of the One Ring and was also “the one whose power was most confused and diminished by daylight” (Unfinished Tales, p. 368).
Posted: 8:48 PM