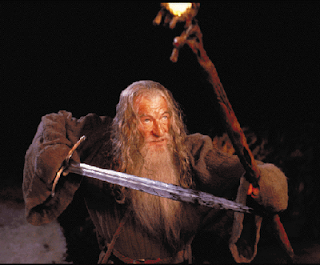 The sword of Gandalf, Glamdring (‘Hammer-of-Foes’) had originally been made by the Elves of Gondolin for the Wars of Beleriand and given to Turgon. After the fall of Gondolin, the sword remained hidden for nearly two Ages before making its way into a troll-hoard, where it was later found by Gandalf (TA 2941), who continued to wield it until the end of the War of the Ring. The sword shone with blue light in the presence of Orcs (who referred to it as Beater), and its mate was Orcrist (the sword of ThorinOakenshield).
Posted: 9:44 AM