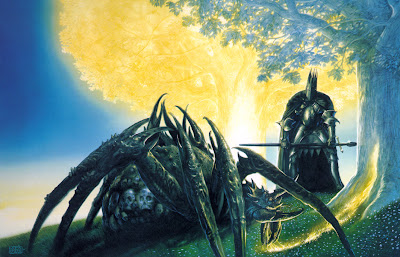 Both a foul and dangerous monster, Ungoliant was the first (and also greatest) of the spider-race. She had her origins as an entity of the Outer Darkness, created at the Beginning of Arda, and was the first of the Great Demons to invade the World. It has been suggested that she may have been a Maiar corrupted by Melkor, but the only being she served in Arda was herself.
Following the fall of Utumno, Ungoliant dwelt in Avathar, in the freezing south of Aman where none of the Valar ever went. Her hunger was for Light, which she devoured much in the same way that lesser spiders devoured insects. After Melkor fled from Valinor, he came upon the great spider and promised to assuage her hunger in return for her aid in the destruction of the Two Trees. The two went to Ezellohar, where Ungoliant drained the Trees of their sap, poisoned them, and drank the Wells of Varda.
After the poisoning of the Trees, she fled with Melkor to Middle-earth, larger in size after her meal but hungry as ever. By now, even Melkor feared her, and when she discovered that he had withheld from her the most precious item from their sack of Formenos – the Silmarils – she attacked him. At the last minute Ungoliant was driven off by the Balrogs, and the now fearful spider fled south, making her nests in the Ered Gorgoroth – the Mountains of Terror. It was here that she mated with lesser beasts of Middle-earth and produced offspring that were evil like herself, though of lesser stature (the most well-known of these offspring being Shelob the Great). Her eventual fate was not recorded, but it has been said that she went far south and devoured herself in hunger.
Posted: 6:46 PM