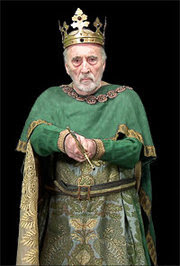 Christopher Lee, who recently celebrated his 90th birthday, is marking the milestone by releasing his second metal album, titled Charlemagne: The Omens of Death, which the actor describes as “100 percent heavy metal.”

“I’ve done my bits and pieces and they are heavy metal,” he said. “I’m not screaming or anything like that, but it is definitely 100 percent heavy metal.”

The actor’s first metal album, Charlemagne: By the Swords and the Cross, was more along the lines of symphonic metal and was met with critical acclaim.

On BBC Radio 5’s “Up All Night” programme, Lee talked about his history with the genre.

“I was first introduced to metal when I sang with a band called Rhapsody. But what I sang was not heavy metal. I sang with a tenor. Then I worked with Manowar as a narrator, I think it was in Germany, and again, that was not me singing metal. I became fascinated by this, cause in terms of the history of music, it’s fairly recent really. And if it’s properly done and you can understand the story and you can understand what the people are singing and you have the right bands and the right singers, I think it’s rather exciting.”

In 2010, Lee received the “Spirit of the Hammer” award at the annual Metal Hammer Golden God ceremony, which he described as, “a most amazing occasion for me, very exciting, and something I’d never had happen to me my whole career, my whole life, in terms of awards. I have received quite a few. But I was interviewed … by Tony Iommi, who founded Black Sabbath. And I hadn’t heard them, but I made it a point [to]. I thought it was extraordinary.”

While Charlemagne: The Omens of Death does not yet have an exact release date, is expected to become available this summer (followed by a musical based on the album coming in 2013). In the meantime, you can listen to samples from two of his songs on Amazon.com.