Philippa Boyens on Adapting 'The Hobbit' for the Big Screen 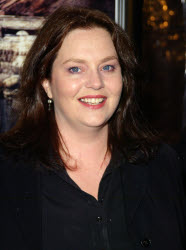 Hobbit screenwriter Philippa Boyens was recently interviewed by Movieline about The Hobbit: An Unexpected Journey and the process of adapting the classic novel to film. In the interview, several important issues were touched upon – particularly my biggest gripe, the inclusion of Azog; but also the current buzz as to whether or not Jackson and Co. might try to turn The Silmarillion into a film as well.

When asked about their decision to re-write Azog, who was slain in battle over 140 years prior to the Quest of Erebor, Boyens explained that, "[...] when we were first looking at this as a piece of storytelling, we wanted to get to the dragon. We did try getting to the dragon in one draft, actually. But you had to lose so much along the way. We also understood that the Necromancer is too ephemeral at this moment – too much of a shadowy character that's not fully understood. It's a great mystery story, but there's a big problem because there's no actual, physical enemy. And yet the dwarves had a very natural one and he was to be found. When Peter [Jackson] talks about taking this chance to tell more of the story, that was one of the pieces that we took — that and Moria. It's the story of the great hatred between the orcs and the dwarves, where it came from and what was informing it. And, also, I mean, Azog the Defiler. What a great name! You kind of can't beat that as a name."

As for Bilbo, Boyens acknowledged that he is "too much a piece of baggage visually in the story that it becomes very hard to take his POV if he's that passive. So we had to make him more active. And, you know, Bilbo is very clever. And he's a quick thinker."

With the success of The Hobbit: An Unexpected Journey, many fans are eager to see Jackson linger in Middle-earth just a wee bit longer – via The Silmarillion, perhaps. While it's a well-known fact that Jackson and Co. do not own the rights to any of Tolkien's work beyond The Hobbit and The Lord of the Rings, that hasn't stopped fans – or even the screenwriters themselves – from dreaming about it, though Boyens admits the reality is painful.


Be sure to check out the full interview at Movieline.