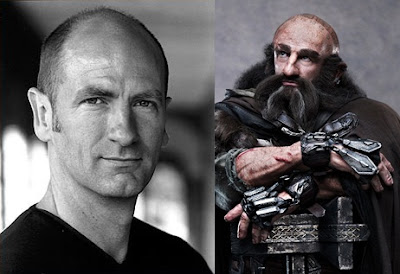 It’s not every day one gets to interview their favourite Dwarf. Graham McTavish, the Scottish actor who plays Dwalin in Peter Jackson’s “Hobbit” films, was kind enough to take some time out of his schedule to answer a few questions via Twitter.

BS: First, the frequently asked question: How familiar were you with Tolkien and Middle-earth prior to auditioning for The Hobbit?

GM: I had read and seen The Lord of the Rings but somehow I had missed out on The Hobbit. So I knew the world but not the specific tale.

BS: How did you come to audition for the role of Dwalin? Was it a result of your interest in LotR, or was it set up by your agent?

GM: It was arranged through my agents in Los Angeles.

BS: Prior to being cast, were you aware of the almost cult-like following Tolkien’s works and Jackson’s films have achieved? How does it feel to now be a part of that?

GM: I know Billy Boyd from Scottish theatre days, so I knew about Rings. It feels humbling to be a part of that legacy.

BS: How did you prepare for your role as Dwalin?

GM: 3 months gym with my trainer in LA then another 3 in NZ with stunts, horse riding, dialect, dwarf movement, as well as related reading.

BS: Did you read The Hobbit to get a better feel for Dwalin’s personality? What were your initial thoughts regarding the character?

GM: I did read the book more than once, not just for Dwalin. The fact that he arrives first gave me a good pointer towards his character.

BS: Did you notice any similarities between yourself and Dwalin?

GM: I know people like Dwalin. I play him, so my character inevitably informs my portrayal of his, but we have key differences too!

BS: What would you say is the biggest difference between you and Dwalin?

GM: He has tattoos on his head.

BS: Dwalin does give off a “badass” vibe, and you’ve played some other tough guy characters. Are you just as badass in real life?

GM: I've played many kinds of people; some of them could be seen as tough. I'm no more like that than any of the other types I portray.

BS: All of the Dwarves got commemorative rings, just as members of the Fellowship got tattoos after filming The Lord of the Rings. Did you take home any other souvenirs from the film?

GM: They very kindly presented me with Grasper and Keeper. Other than that....just many, many wonderful memories with more, I hope, to come!

Graham McTavish is a Scottish TV, film, and voice actor. Most recently, he starred in The Wicker Tree (the second film in Robin Hardy’s The Wicker Man trilogy). In addition to appearing on such TV series as 24, NCIS, CSI: Miami, and Red Dwarf, he has also done voice work for many popular video games, including Uncharted 2 and 3, Infamous 2, Metro 2033 and several games in the Call of Duty franchise.

Be sure to visit Graham’s website at http://grahammctavish.com and follow him on Twitter @grahammctavish. He’s a fantastic guy who really makes an effort to connect with each and every one of his fans.
Posted: 10:24 PM

Email ThisBlogThis!Share to TwitterShare to FacebookShare to Pinterest
Tagged: Interview, The Hobbit films