Press Release: WBHE Announces "The Hobbit: The Battle of the Five Armies" on Blu-ray

Burbank, CA, February 17, 2015 – The adventures of Bilbo Baggins come to an epic conclusion in “The Hobbit: The Battle of the Five Armies,” a production of New Line Cinema and Metro-Goldwyn-Mayer Pictures (MGM), arriving onto Blu-ray 3D Combo Pack, Blu-ray Combo Pack, DVD and Digital HD on March 24 from Warner Bros. Home Entertainment. From Academy Award®-winning* filmmaker Peter Jackson comes “The Hobbit: The Battle of the Five Armies,” the third in a trilogy of films adapting the enduringly popular masterpiece The Hobbit, by J.R.R. Tolkien.

The screenplay for “The Hobbit: The Battle of the Five Armies” is by Fran Walsh & Philippa Boyens & Peter Jackson & Guillermo del Toro, based on the novel by J.R.R. Tolkien. Jackson also produced the film, together with Carolynne Cunningham, Zane Weiner and Fran Walsh. The executive producers are Alan Horn, Toby Emmerich, Ken Kamins and Carolyn Blackwood, with Philippa Boyens and Eileen Moran serving as co-producers.

“The Hobbit” Trilogy tells a continuous story set in Middle-earth 60 years before “The Lord of the Rings,” which Academy Award®-winning filmmaker Peter Jackson and his team brought to the big screen in the blockbuster trilogy that culminated with the Oscar®-winning “The Lord of the Rings: The Return of the King.” 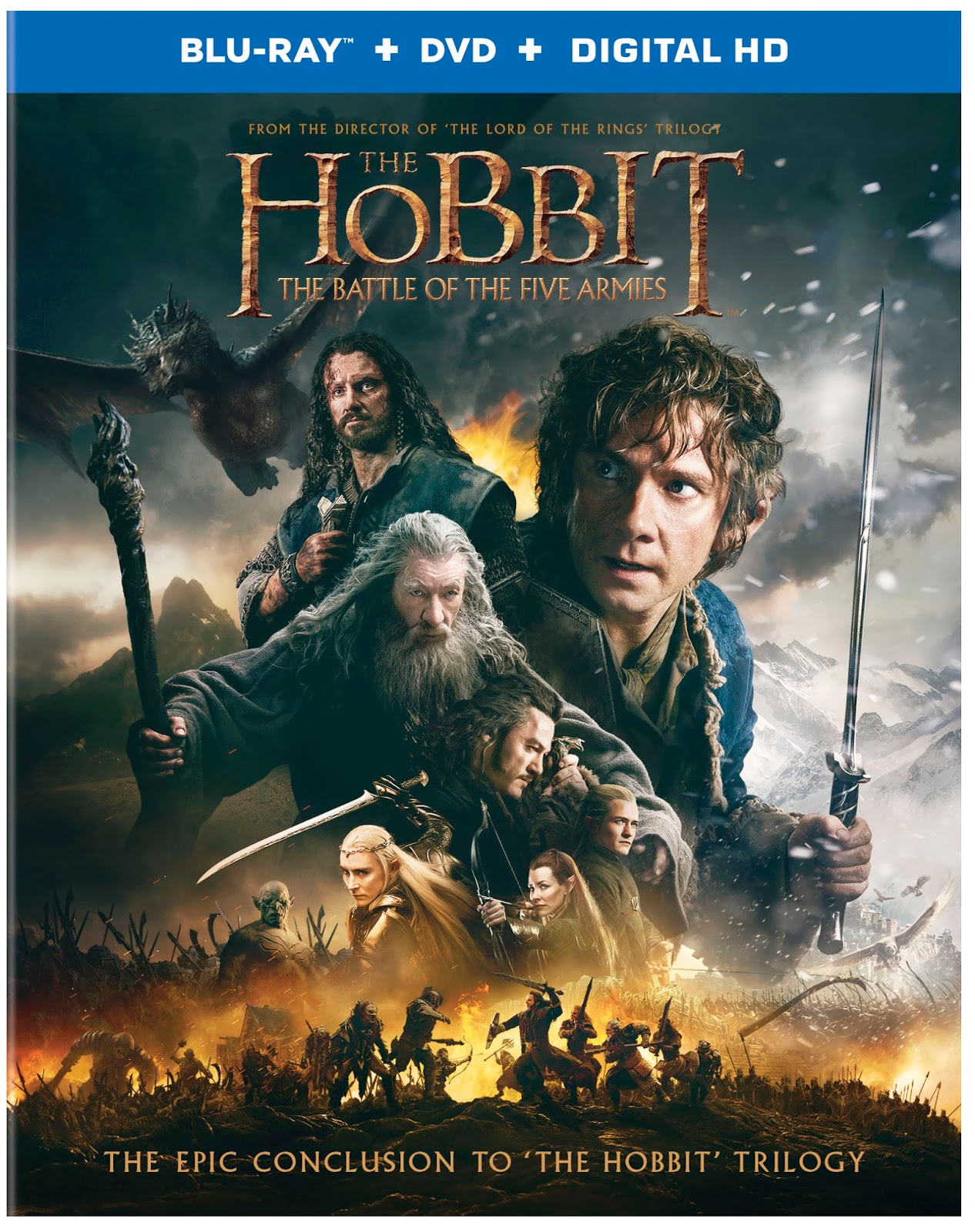 “The Hobbit: The Battle of the Five Armies” brings to an epic conclusion the adventure of Bilbo Baggins (Martin Freeman), Thorin Oakenshield (Richard Armitage) and the Company of Dwarves. The Dwarves of Erebor have reclaimed the vast wealth of their homeland, but now must face the consequences of having unleashed the terrifying Dragon, Smaug, upon the defenseless men, women and children of Lake-town.

As he succumbs to dragon-sickness, the King Under the Mountain, Thorin Oakenshield, sacrifices friendship and honor in search for the legendary Arkenstone. Unable to help Thorin see reason, Bilbo is driven to make a desperate and dangerous choice, not knowing that even greater perils lie ahead. An ancient enemy has returned to Middle-earth. Sauron, the Dark Lord, has sent forth legions of Orcs in a stealth attack upon the Lonely Mountain.

As darkness converges on their escalating conflict, the races of Dwarves, Elves and Men must decide – unite or be destroyed. Bilbo finds himself fighting for his life and the lives of his friends as five great armies go to war.

ABOUT DIGITAL HD WITH ULTRAVIOLET

* Peter Jackson, Best Director, Best Picture, Best Adapted Screenplay - “The Lord of the Rings: The Return of the King” (2005)