I recently got it in my head that I wanted to do some Sauron-inspired makeup. I ended up picking up a palette of applicable colours at my local drugstore: "Brown Eyed Girl" from Jesse's Girl cosmetics. I don't have a lot of experience with eyeshadow, so my attempt was pretty rushed. After I did the eyes, I remembered I had a red wig...so behold! A very quick Sauron cosplay. 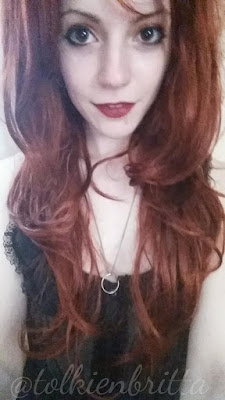 I would love to do a serious Sauron cosplay at some point, though I'd much rather come up with my own interpretation based on The Silmarillion. Soon, I hope! 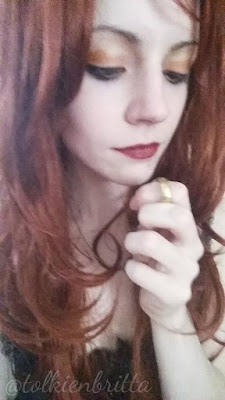 "Now the Elves made many rings; but secretly Sauron made One Ring to rule all the others, and their power was bound up with it, to be subject wholly to it and to last only so long as it too should last. And much of the strength and will of Sauron passed into that One Ring; for the power of the Elven-rings was very great, and that which should govern them must be a thing of surpassing potency; and Sauron forged it in the Mountain of Fire in the Land of Shadow. And while he wore the One Ring he could perceive all the things that were done by means of the lesser rings, and he could see and govern the very thoughts of those that wore them." -The Silmarillion
Posted: 4:10 PM