Yesterday, my boyfriend and I celebrated our 7-year anniversary. Because he is the most selfless person I know, we spent Monday and Tuesday driving around Maine and northern New Hampshire, visiting scenic locations and looking for books. While we didn't have time to make it to all of my favourite bookstores (there's an antique dealer in Oxford, ME that had a bunch of Tolkien books last year when we visited; and I got a lead on a new store in Norway, ME, that was unfortunately not on our route this trip), we did manage to hit my two favourite bookstores: The Maine Bookhouse in Oxford, ME and The Local Bookie in Conway, NH.

Our first stop was The Maine Bookhouse, located on Main Street. The owner, Harry, is one of the nicest and most humble people I've ever met. He is very kind and welcoming, and no matter what you buy or how much you spend, he makes it very apparent that he appreciates both you and your business. He only had a few Tolkien books, all of which I already had; so I grabbed a stack of Isaac Asimov's Science Fiction Magazine from 1979 and Winnie Ille Pu (Winnie the Pooh in Latin), which my boyfriend spotted for me. As I paid for my books, Harry pulled out J.R.R. Tolkien, Scholar and Storyteller: Essays in Memoriam, which I had never seen before. This is one of my favourite bookstores as I never leave empty-handed. We visited last year on our anniversary and it has now become a tradition to stop here every year (and hopefully more often than that!).

For more on The Maine Bookhouse, visit their website or Facebook; and if you're ever in Norway, ME, be sure to stop by their new sister store, Food for Thought!

The Local Bookie, located on Main Street in Conway, NH, is another favourite of mine. The owner, Karen, is extremely friendly and helpful. I've only been in her shop once before, but my parents have made several trips in my absence and brought my back numerous unique finds. When I stopped in yesterday, I again found mostly books I already had. I grabbed several duplicates to replace damaged or well-worn copies currently in my collection, and when I went to pay, she immediately remembered me and began pulling out books she had set aside for me: Bilbo's Last Song, Tolkien Trivia, After the Ring, and Tolkien: A Biography by Humphrey Carpenter. I also managed to find two books I didn't previously have: Smith of Wooton Major (the cover I had previously was magenta, not white) and The Hobbit (50th anniversary edition/"romance novel edition"). 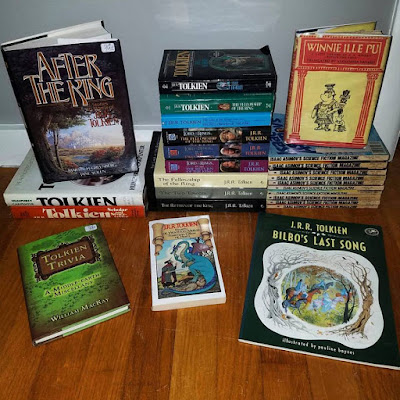