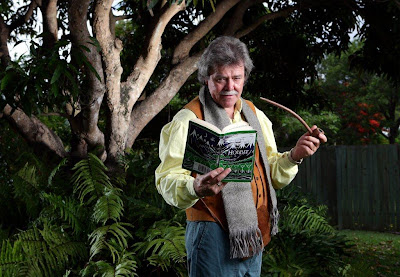 Peter Kenny of Queensland, Australia is so passionate about the writings of J.R.R. Tolkien, and has amassed one of the most impressive collections of Middle-earth memorabilia, that he has been deemed Australia’s biggest Tolkien fan.

Peter’s first experience was in 1976, when, as a young teacher, he was transferred to the sugar cane growing district of Bundaberg. “Living in a new town I met people from various different walks of life and this experience would open new doors in my life,” he recalls. “It is said new friendships are doorways to new worlds, and one doorway led me to a road which I would follow to the wonderful world of Tolkien’s Middle-earth.”

“Little did I realise back then that a large, single volume paperback, called The Lord of the Rings, given as a gift, would create in me a person who is now a passionate Tolkien fan who has gathered a large diverse collection of Tolkien books and memorabilia and attends overseas events as a presenter of various Tolkien related subjects.”

However, Peter admits he had some difficulty getting into The Lord of the Rings.

“That first contact with the Tolkien phenomenon was fairly slow going and the story The Lord of the Rings was arousing no interest in me as its opening chapters failed to capture my imagination. I revisited the book on occasions, skipping chapters to read only those I considered to be exciting, but largely it remained unfinished for a considerable time.

“It was 1978 when I met The Hobbit.  A teacher colleague was reading the story to our students and I suddenly became aware of the link between this story and The Lord of the Rings. Those previously uninteresting opening chapters now became enthralling to me.  I soon bought a copy of The Hobbit and within a few weeks I had read this story and the unfinished The Lord of the Rings.”

So what was it about The Hobbit that drew him in?

“The Hobbit was my first real visit to Middle-earth. This was a story so different to anything I had read before. All books I had read up to this time were set in our real world, past or present, but they were stories in a world I was familiar with. The few Science Fiction stories I had read took me to other planets in the universe, but The Hobbit was a new experience. It introduced me to a world full of adventure where fantastic people, both good and bad, interacted in an exciting story. This new “universe” captured my full attention and opened my imagination to new possibilities and images. I now felt I was a citizen of this world of Middle-earth and I wanted to know more and more about it.”

In the decades that have followed, Peter has accumulated many unique and exciting pieces of Tolkien memorabilia. Among his most prized possessions are a “porcelain statue of Arwen and Aragorn, the leather bound Children of Hurin, Proudfoot’s personal invitation to Bilbo’s Party and several others I value and like.”

The most prized, however, is his 1937 edition of The Hobbit, “although I personally like the original unique newspaper lift out: ‘THE TIMES LITERARY SUPPLEMENT’, SATURDAY, OCTOBER 2, 1937. The Hobbit Book Review… A WORLD FOR CHILDREN.’ The final sentence of the review reads, ‘Prediction is dangerous; but ‘The Hobbit’ may well prove a classic.’

“But of course my biggest item, that everyone loves, is ‘The Hobbit Hole-A miniature Bag End’ (known as Maddie’s Hobbit Hole-after its creator). [It is] a 102cm x 117cm model that will soon be on display in the Queensland Museum.” 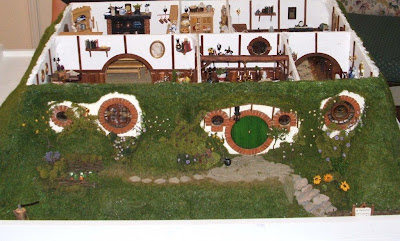 Another way in which Peter has channelled his passion is by being an active member of the Brisbane Tolkien Fellowship. “The Fellowship is not a formal group,” he explains, “but it meets in a social atmosphere and currently I am the convenor of meetings.”

The mission of the Fellowship is:

To create a greater awareness and appreciation of all J.R.R. Tolkien's works and all that is associated with his world.
To meet people with similar interests and to develop relationships.
To create social events to bring people together with friends and family.
To create events where people can share knowledge, skills, and ideas. 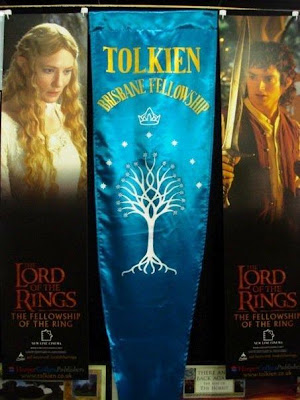 Additionally, he founded a sub-group within the Fellowship, known as the Proudfoot Esquire Foundation, which is more formal than the Fellowship, being run as a small non-profit business organisation.

“I originally formed the Fortinbras Proudfoot Esq. Foundation through my love of all things Tolkien and the knowledge that there are others out there who share my passion. My objective for the Foundation is that it be maintained as a non-profit organisation with a charter to raise funds for various charitable organisations which support children’s Literacy and Education through Literacy for all age groups. It is through the promotion and presentation of public events that we aim to achieve these goals.”

While the Foundation has currently been working only at the local level, enough people have expressed interest in helping it achieve its goals that Peter says there are plans to begin looking at the national and international levels.

“A number of fundraising events and initiatives are being planned and we hope to have some exciting things to share in the near future which should attract interests from a larger audience.

It is therefore the right time to ask fans from overseas to suggest initiatives that we could pursue in our quest to support Children’s Literacy and Education through Literacy.”

For more information about Peter Kenny, the Brisbane Tolkien Fellowship, or the Proudfoot Esquire Foundation, visit his website at http://proudfootesq.com/ and follow him on Twitter (@ProudfootEsq). 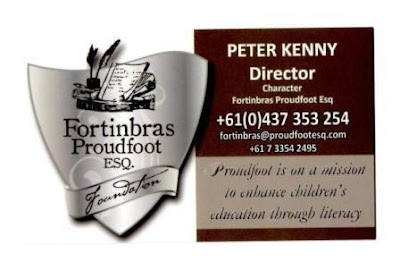