David Rowe (@TolkienProverbs) has been kind enough to submit another guest post. Please be sure to follow him on Twitter – and keep an eye out for his upcoming book, 'The Proverbs of Middle-earth'!

By my bedside, there are presently twelve books, of which six are by, or relating to, JRR Tolkien. Having been reading Tolkien for about 25 years, I tend not to discover 'new' things an awful lot, but the other day I was struck afresh by something and it got me thinking. Here's the quote (from #195 in The Letters Of JRR Tolkien):

Actually I am a Christian, and indeed a Roman Catholic, so that I do not expect 'history' to be anything but a 'long defeat' - though it contains some samples or glimpses of final victory.

Now, this may be me exposing my ignorance, but I don't think I've ever before been told that this is a (or the) standard Catholic worldview.* Having grown up in a society that tends to prize the new (or the young) above the old, perhaps I had assumed that an attitude of 'everything's getting better and better' should be standard for Christians too, who, after all, believe that God is 'making all things new'. It seems Tolkien would disagree. For him, what beauty there is in the world is primarily inherited and fading, however much we fight to preserve it.

All of us instinctively recognise something about the past which makes it good in contrast to the present - our fond reminiscences are happy places to be - but we're told that we are silly to think like that. The time is now. Seize the day.

Contrast that with the Elves of Middle-earth. They had lived in paradise - the High Elves had anyway - and seen perfection. They remembered it. But they weren't a forward-thinking people - all their songs and ideals came from millenia before, and it was all they could hope for to 'preserve all things unstained,' as Elrond said. Elrond, of course, bore one of the three Elven Rings, which were specifically endowed with the power of preservation. [letter #144]

The idea of 'the long defeat' - the phrase is, in fact, Galadriel's - is not what we expect in a 'battle between good and evil' like the War of the Ring. The Rohirrim ride 'for ruin and the world's ending', not for a present victory; that is only a fool's hope (says Gandalf). The Council of Elrond determines to attempt the Quest, though, if successful, it will mean 'the Three will fail, and many fair things will fade.' There is no victorious happy ending in sight.

And so it is with us. Everything in creation is decomposing. We live in a world where humans are constantly trying to make legacies for themselves, whilst concurrently destroying or staining the only things that actually do last.

It's pretty depressing - I can see where Nihilists are coming from, frankly. And I have no doubt that the changes that Tolkien saw in his lifetime - from the destruction of rural Warwickshire to the advent of Atom bomb, not to mention the empty massacres of the First World War and the totalitarianism and genocide of the Second - gave him very little enthusiasm for progress. However, Tolkien's slightly-fatalistic brand of Catholicism also recognises a way out: Death.

It is no surprise that Tolkien, on later reflection, found that as much as The Lord of the Rings has a theme, that theme is 'death and immortality'. [letter #246] It seems to me that JRR Tolkien had a highly pessimistic view of life, and yet a profoundly hopeful perspective on death. Maybe he could not bring back the destroyed Warwickshire countryside of his youth, and did not hope that any kind of Earthly paradise was round the corner, but this pessimism did not cripple him into apathy or inaction: he worked, he created, he laughed, he inspired. He fought the long defeat.

And why? Well, when Sam needed to, he saw a star through the smogs of Mordor and 'the beauty of it smote his heart, as he looked up out of the forsaken land, and hope returned to him. For like a shaft, clear and cold, the thought pierced him that in the end the Shadow was only a small and passing thing: there was light and high beauty for ever beyond its reach.'

This passage ends beautifully: 'Now, for a moment, his own fate, and even his master's ceased to trouble him... putting away all fear he cast himself into a deep untroubled sleep. They woke together, hand in hand.' 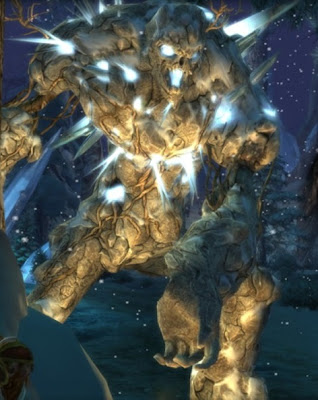 If you're like me and cannot wait to begin playing LOTRO: Helm's Deep, then you'll probably be happy to know that you can at least begin exploring a new region in Middle-earth when Update 11 – "Treachery of the White Hand" – goes live this Monday, May 13.

With Update 11, players will be able to continue the epic story through the new Wildermore region, a remote area of Eastern Rohan which is in need of restoration after suffering from destruction at the hands of the stone giant Núrzum.

I'm happy to announce that I'll be a guest on Legendarium's "Girl Power" podcast this Sunday, May 5th, at 6 pm EST, along with a few other lovely ladies - Arwen Kester of the Middle-earth News; Frag Dolls' Sabre; and Marita Tathariel. 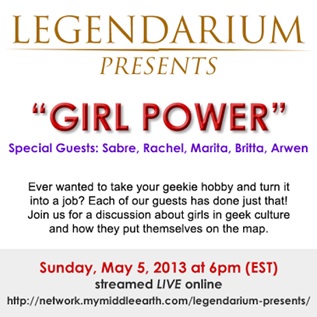