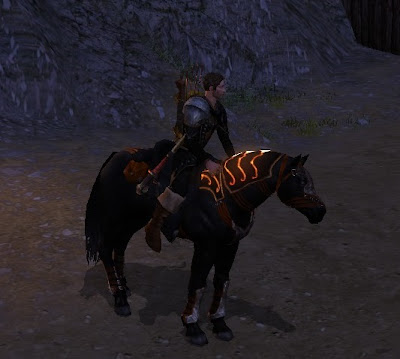 Now I'm plugging through the epic storyline, which currently has me a prisoner of Isengard. After that I should be working on my rep with Théodred's Riders. And then...ROHAN!
Posted: 3:24 PM No comments:

Boston Comic Con 2013: There and Back Again

I’ll preface this article by saying that Boston Comic Con 2013 was my first Comic Con; the only convention I had attended previously was an East Coast Lord of the Rings fan convention (ELF) hosted by TheOneRing.net in 2006 (one of the downsides of living in New England is that big events like these don’t happen as frequently as I would like).

I guess I’d somehow missed the adverts for Boston Comic Con in previous years; I found out about the event about two weeks prior to the original April date while trying to compile a list of upcoming conventions for 2013. I knew that this year I had to go and see for myself what Comic Con is really all about — especially after seeing the guest list: Lauren Cohan and Laurie Holden of The Walking Dead, and Dean O’Gorman and Aidan Turner  from The Hobbit. Following the tragic bombing at the Boston Marathon a week prior to Boston Comic Con, the event was postponed until August. Unfortunately, Lauren Cohan had to drop out.

My father, who became a fan of The Walking Dead this past season, happily agreed to come along for a chance to see “Andrea.” (Also, after reading about Johnny Galecki making a surprise appearance at San Diego Comic Con, he was hopeful that another celebrity might surprise us in Boston.) My boyfriend also came along, being a huge fan of Battlestar Galactica and Star Wars, as did our boss (also a huge Star Wars fan).

Thankfully, Boston is close enough that we didn’t have to fly in or get up early just to make it there in time. We left around 9 am and got there a little after 10.

When we got there, the line seemed to wrap around the entire building; I was sure we wouldn’t be getting in anytime soon. Standing in the hot sun, I was immediately relieved that I did not dress up for this event; but when all was said and done, we only ended up waiting in line for about twenty minutes, so it actually paid off to show up a bit late. 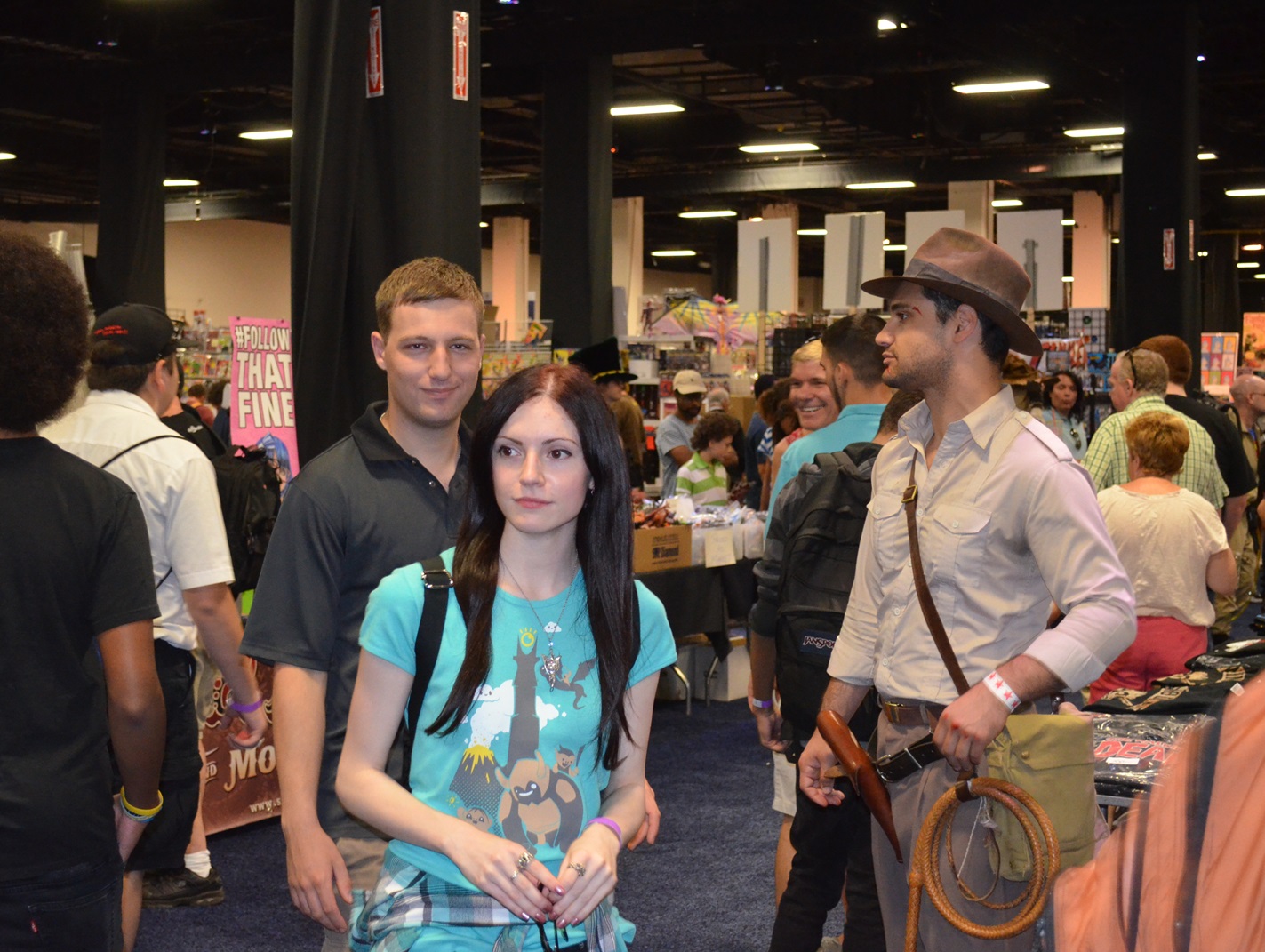 Within ten minutes of being inside, who do you think walked past me but Aidan Turner and Dean O’Gorman. Somehow I recognised Dean first; for a split second, I was star struck: like an excited child, I tugged at my boyfriend’s arm and several times chanted, “OhmyGodit’sAidanandDean!” I could have tried to get their attention – even a photograph of them walking by might have sufficed – but for some reason, in that moment I was unable to do anything but stare.

I wasn’t initially planning on getting any autographs. I had intended to spend my cash on the photo-op with Aidan and Dean, thinking that was the best bang for my buck. Having started watching Being Human just over a month ago (and subsequently becoming hooked on the series), I was determined to meet Aidan in particular. But trying to think in a more practical sense, I figured an autograph would allow a bit more time to actually interact with him; when I met Billy Boyd back in 2006, the photo-op process was simply: exchange polite greetings, have photo taken, and move on. I was eager not to repeat that experience, so I chose to go stand in the autograph line.

It was not a long wait by any means; we were there early, so there wasn’t much of a line to begin with. But it moved rather slowly. They must not be ready for us yet, I thought; but then every now and then I’d look ahead and see a young girl walking back from the table. I realised Aidan was actually stopping to have a chat with everyone who stopped by!

That’s when I panicked.

What do I say? What if I make a fool of myself?

But there’s something about Aidan that makes you feel instantly comfortable around him. I hate to sound too sappy, but he has a way of making you feel like you’re the only person in the room when he talks to you. He is very sincere and welcoming, and it was clear he was really enjoying the convention experience. I immediately felt very relaxed.

We shook hands, introduced ourselves, and exchanged pleasantries. Surprisingly, I didn’t say anything too stupid (although I did make some cheesy remark about how beautiful the weather was). He asked if I had been there on Saturday, and I responded that I was only there for the one day. When I told him this was my first Comic Con, he seemed genuinely excited, assuring me that I was in for an incredible time. We chatted a bit, and I asked him to sign my deluxe pocket edition of The Hobbit – a Christmas present from my boyfriend (who thankfully didn’t mind!).

We walked around the convention floor for the next few hours, surveying each of the vendor tables to see what souvenirs we might like to come back for and photographing cosplayers along the way. We grabbed some overpriced (but delicious) food, forgetting completely that there was both a Dunkin’ Donuts and 7-11 right next door.

I kept debating whether or not to pay for the photo-op. It was worth it, certainly, but at the same time, I didn’t really have an extra $100 at my disposal. By the time I decided to just go ahead and spend the money, time was running out and we were unsure of where to go (there were no signs or announcements for the photo-ops, and the staff members we asked were unsure of the location themselves). I watched my phone anxiously as the time went by: 1:15… 1:20… 1:30.

Shouldn’t have been so indecisive, I lamented. Maybe next time…

We continued to walk the floor; I decided it was a perfect time to start buying things. Surprisingly, most of the items were all reasonably priced (at least compared to the comic book stores and other retailers I’ve been to). I ended up purchasing for myself a Tom Bombadil bust and two Hobbit pins; I grabbed a Walking Dead pin (featuring Andrea) for my dad and two pins for my boyfriend (Veronica Mars and Walter Bishop from Fringe). Because Adventure Time is a guilty pleasure of ours, he grabbed me a cute Gunter plushie. There was also a stand giving away free movie posters; I grabbed a small Desolation of Smaug poster, which ultimately got crinkled in my backpack (but still looks great).

After making a quick run to Dunkin’ Donuts for caffeine, we decided to try and get in line for the Hobbit Q&A, which would be starting in about an hour or so.  My heart sank when we got there: the line seemed to go on forever. My companions were growing tired, and I didn’t want to make any of them wait around for an hour; I decided to abandon my quest to sit in on the panel. We stuck around to watch participants in the costume contest come out and show off their costumes and their awards. I still don’t know the results or how individuals were judged, but many of the most impressive costumes we had seen that day hadn’t even placed in the competition, which didn’t make any sense to us.

We walked back into the hallway where the Hobbit Q&A line was stationed, trying to come up with a plan for the remainder of the evening. Do we call it a day and get going? Or do we try to stick around and see if we can still get in to the panel?

Suddenly I saw Dean coming down the stairs; my dad had noticed his leg brace earlier, and as a result I had decided not to even try and pursue him. Fortunately, I have a really awesome dad with an incredible camera; since I wasn’t going to meet Dean, he took plenty of photos for me. Then some of the girls waiting in line for the Q&A noticed Dean; one ran over and gave him a hug, and my comrades suggested I make an attempt to say hello. But after a few photographs with fans, his assistant said there would be no more photos. Dean left and we went back onto the convention floor.

We made our way out there as well, deciding to leave in a few moments. I was kind of starting to feel bummed; no photo-op, no Hobbit panel…

And then suddenly those two familiar faces came into view again. This time, my co-worker convinced me to just ask Aidan about getting a photo. Still a bit hesitant about “bothering” him, my dad came to my aid. He approached Aidan and very nicely asked if he could take a couple of photos for me. Trying to be charming, I smiled (“hello, again!”) and asked if I could trouble him to take one photo with me. He very kindly obliged.

After the impromptu photo-op, we decided to take one more walk past the Waterfront Room, where the Hobbit Q&A was being held. The line was gone and they were still letting some people in! There were still a few seats near the back, so we rushed in and sat down. Unfortunately, the room had two enormous columns on either side, which blocked the view for just about anyone sitting behind them; despite best efforts from the guys in charge, they were unable to move the podiums to a universally visible location, and ended up returning them to their original spot, so I couldn’t see Dean or Aidan at all.

Fortunately, Middle-earth News friend Amanda Capley recorded the panel and was kind enough to send it to us! Thanks, Amanda!

It’s already been announced that Boston Comic Con 2014 has been turned into a three-day event, taking place on August 8, 9, and 10. Depending on the guests, I may try to stay the full length next time. Boston is so close that I hate to spend extra money to stay the night, but at the same time, it doesn’t make sense to drive back and forth several days, either.