The Divisions of Tolkien's Elves (Quendi)

Following the defeat of Melkor in the Battle of the Powers, the Valar decided to bring the Elves back to Valinor to be kept directly under their protection. They sent Oromë to Cuiviénen to summon them.

But upon his return, he discovered that the Elves were reluctant to make the journey, as they were in fear of the Valar. Three ambassadors were sent with Oromë to help coax the Elves – Ingwë, Finwë, and Elwë. These three had seen the light of the Two Trees and were so overcome with awe that they counselled their people to follow the summons and undertake the Great Journey back to Valinor.

However, not all of the Elves accepted the summons, and this separation led to numerous branches, all of which stem from the decision to undertake or reject the Great Journey.

The Avari, or the Unwilling, were those who refused the summons of Oromë and remained in the wilds of Middle-earth. It is said that some of the Avari were corrupted by Melkor in ancient days and became the precursors to Orcs. The Avari are counted among the Moriquendi, the Dark Elves who did not see the Light of the Two Trees.

The Eldar were those who accepted the summons of Oromë and completed the Great Journey to Valinor and are counted among the Caliquendi, those who did see the Light of the Two Trees. The Eldar are comprised of Three Kindreds:

My recap of GraniteCon is long overdue, I know – but better late than never, right?

Although much smaller in scale than Boston Comic Con, GraniteCon (organised by the awesome Double Midnight Comics in Manchester, NH) was fun in that it was easier to get around and see everything. And being a sufferer of chronic migraines, the fact that it was much closer to home really kept me at ease.

My dad, who had accompanied me to Boston Comic Con back in August, came with me to GraniteCon on Saturday, 28 September. Although I do enjoy a good comic book, my knowledge is still somewhat limited; I prefer to go to these events to check out the cosplayers and scope out any neat or must-have collectibles. There were a lot of amazing cosplayers there; check out my GraniteCon album on Facebook to see them all!

In this case, my big purchase was this cute Vaporeon plush. I know it's a bootleg, but I rarely come across memorabilia from Genenerations I and II, so I couldn't resist. The first thing I ever really became "obsessed" with as a child was Pokémon; to this day, you will still catch me playing the video games or watching the original anime. 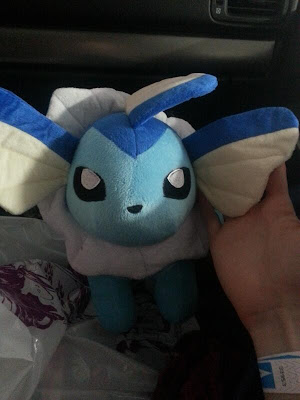 Unlike Boston Comic Con, for GraniteCon, I chose to cosplay as Arwen. The dress was a big hit – not only did I receive many compliments, but I even had a few people ask to take my picture. I'm already eager for the next cosplaying event! 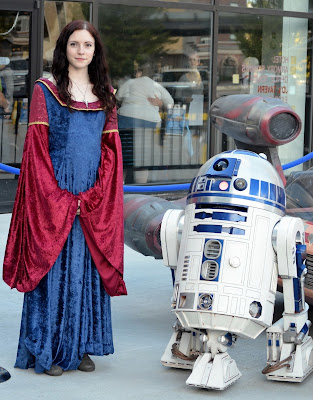 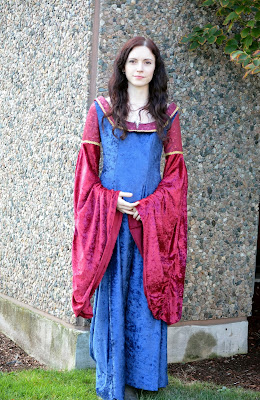 All in all, GraniteCon was a blast. Although we didn't stick around for the entire weekend (or even the entire day), my dad and I had fun, and even stopped at the historic Red Arrow Diner in Manchester. While there, one of their regular customers informed us that a replica was being built for an upcoming Adam Sandler movie – which is only fitting, as Adam Sandler was born in the Granite State!
Posted: 2:51 PM No comments:

It took a gruelling 22 hours (12 hours yesterday, and another 10 today), but my hunter, Bregolad, is finally level 85! He hit the cap a few hours ago in Fangorn. (He was level 80 when I began this grind.)

We still have more Fangorn quests to finish, as well as the entire Sutcrofts region; and once I renew my VIP subscription, there'll be the Wildermore region to tackle. There's still a lot of work to be done! I'm very tempted to renew my subscription so I can participate in some PvP before Helm's Deep is released and the level cap increases again. I have really enjoyed playing my Hunter and think he will be a deadly foe in PvP. 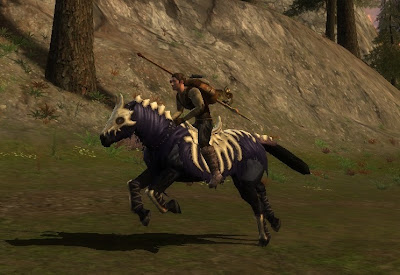 I'd been dying to get my hands on the Bone Set of war-steed cosmetics; lucky for me it happens to be on sale in the LOTRO Store for 995 TP until October 31st! Of course, I grabbed a set for Bregolad, as he only had the Steed of Night, Caparison of Plenty, Steed of Michel Delving, and Rohan Elite Armour sets (I feel it necessary to ensure that things are fair between my two main toons). 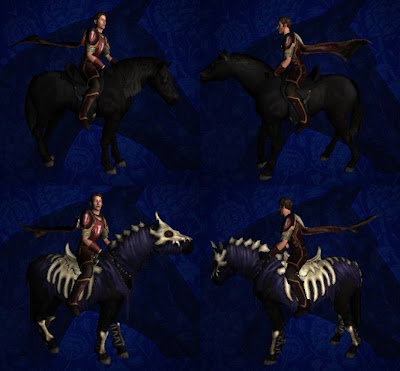 After playing around with my war-steed sets a bit, I decided to keep these two sets as my active outfits. The first is simply the war-steed with its hide and tail dyed black; the only item equipped is a plain black saddle. The second set is the Bone Set, which I've dyed indigo (I haven't yet purchased the black dye set).

In playing my Hunter and paying more attention to war-steeds and mounted combat, I've found that I truly love this aspect of the game. Where I struggled a bit with mounted combat on my Captain, I had an extremely easy and enjoyable time shooting arrows off of Bregolad's war-steed.

I'm going to keep playing Bregolad a bit more. Like I said, there are still so many quests to complete. I'd also like to start preparing my Champion, Brittanyia, so she can finish Rohan and be the next of my toons to hit 85.
Posted: 10:54 PM No comments: