Winter storm Juno graced us with plenty of snow beginning late Monday night. Having some time off and beautiful scenery as a result, it seemed like a perfect opportunity to go out and have some fun in my Blood Red Dress. Yesterday the conditions were still too blizzard-like to go out, but today the snow has stopped and the wind has finally died down. Unfortunately, by the time I made it outside, the sun was also starting to go down; but I hear there's more snow on the way as we head into the weekend, so I have a feeling I'll be doing a better (more professional-looking) shoot soon. 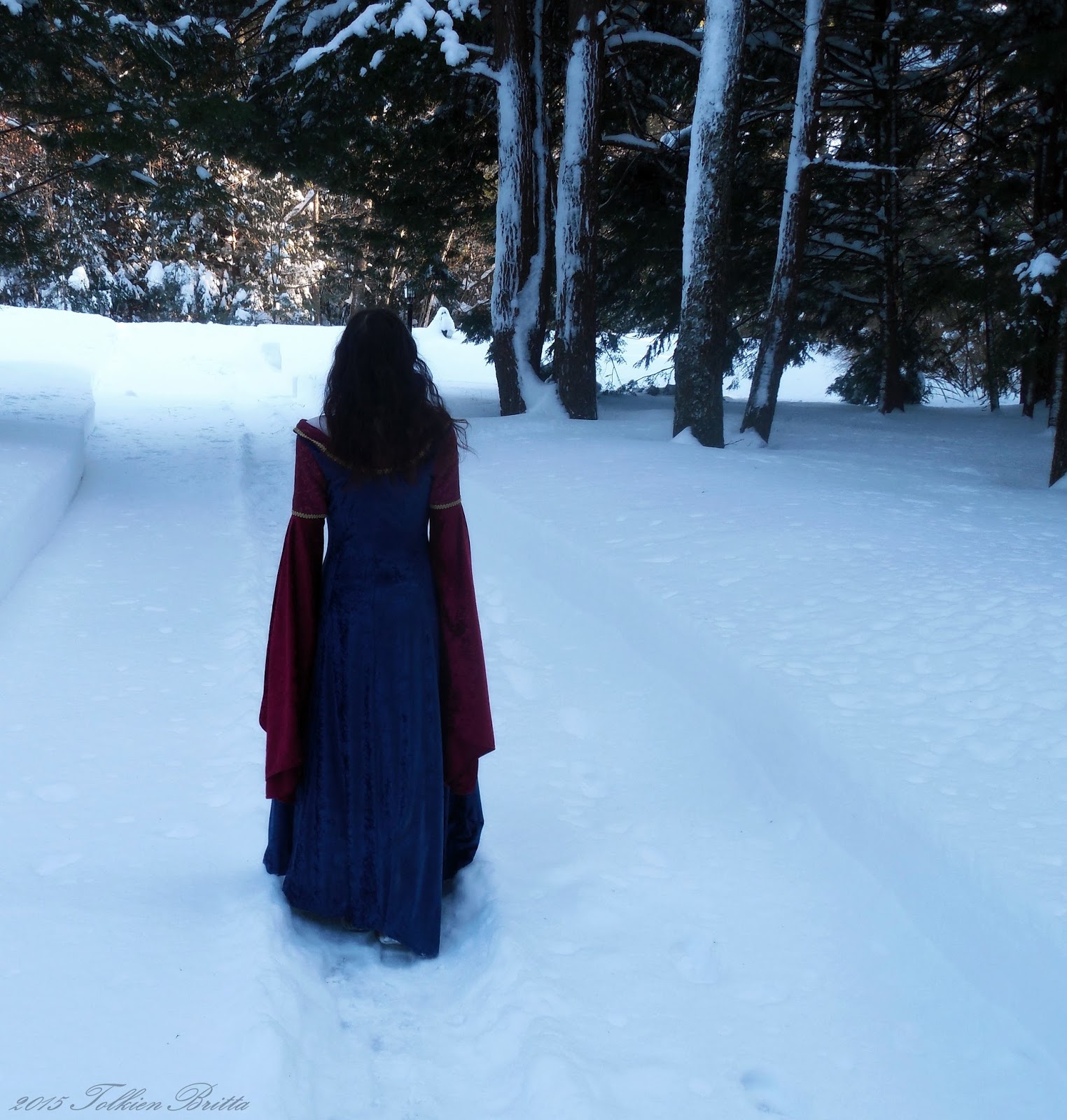 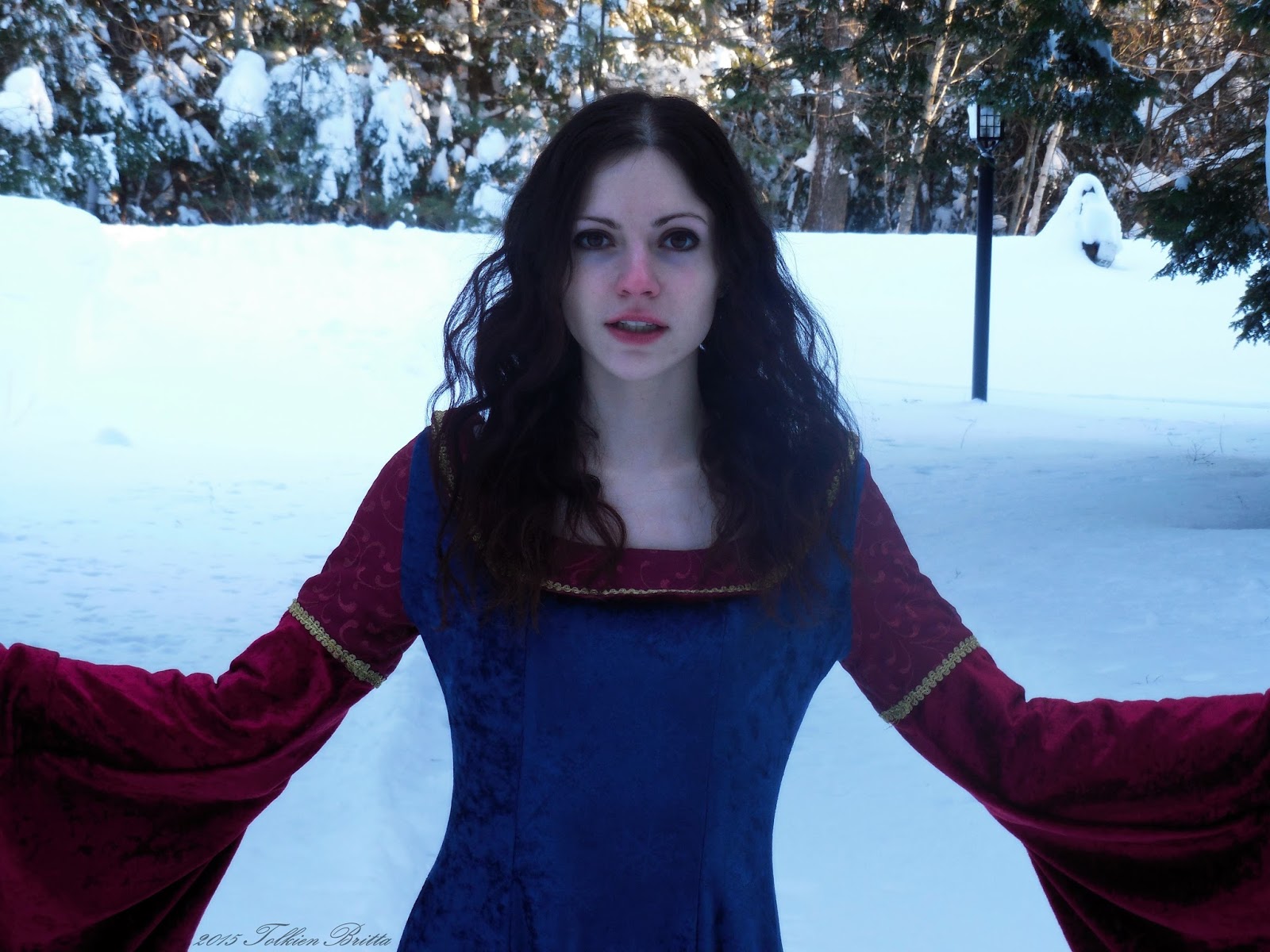 "Stop touching your nose; you're making it red!"
"I didn't touch my nose! It's really cold outside!" 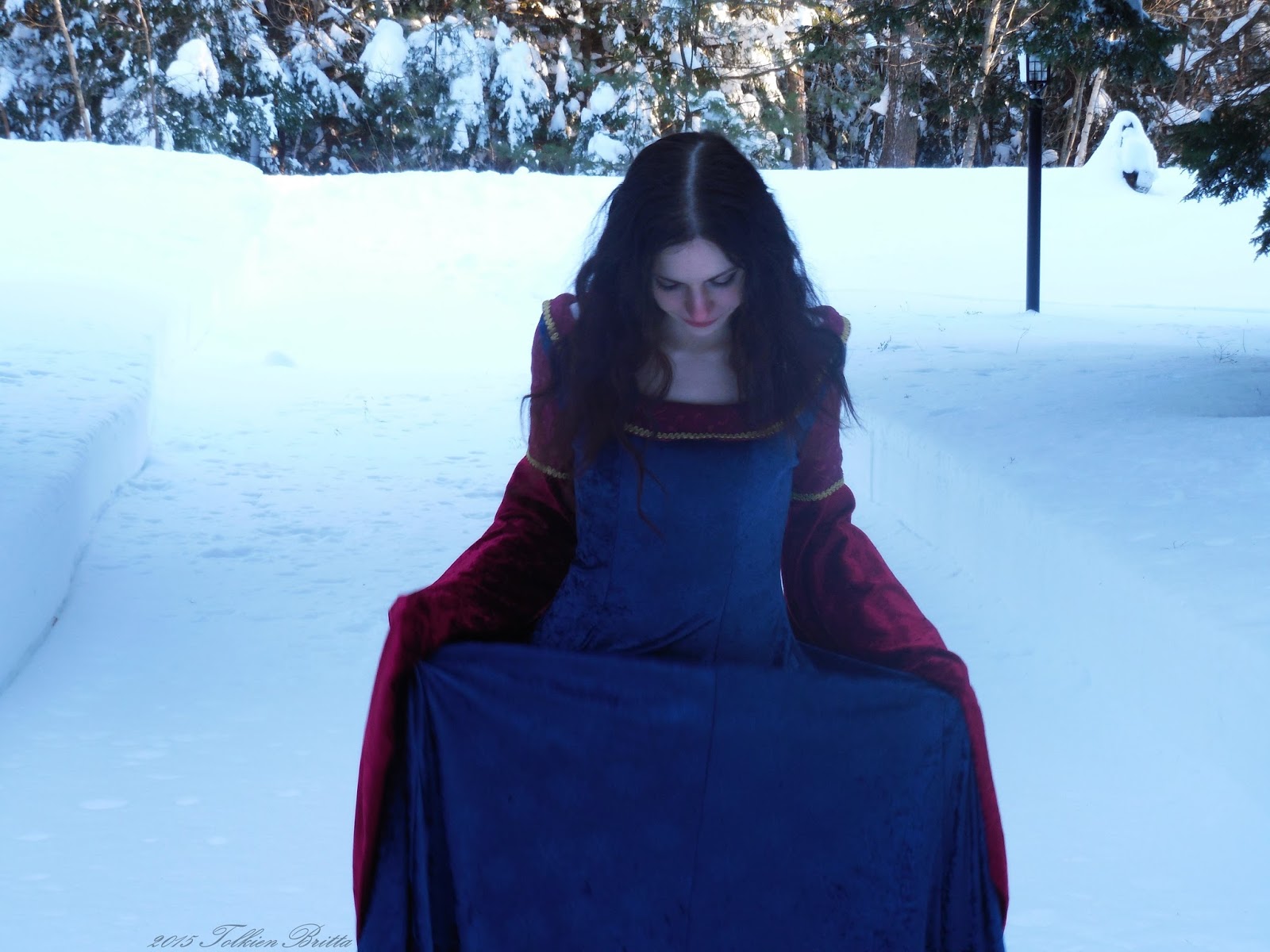 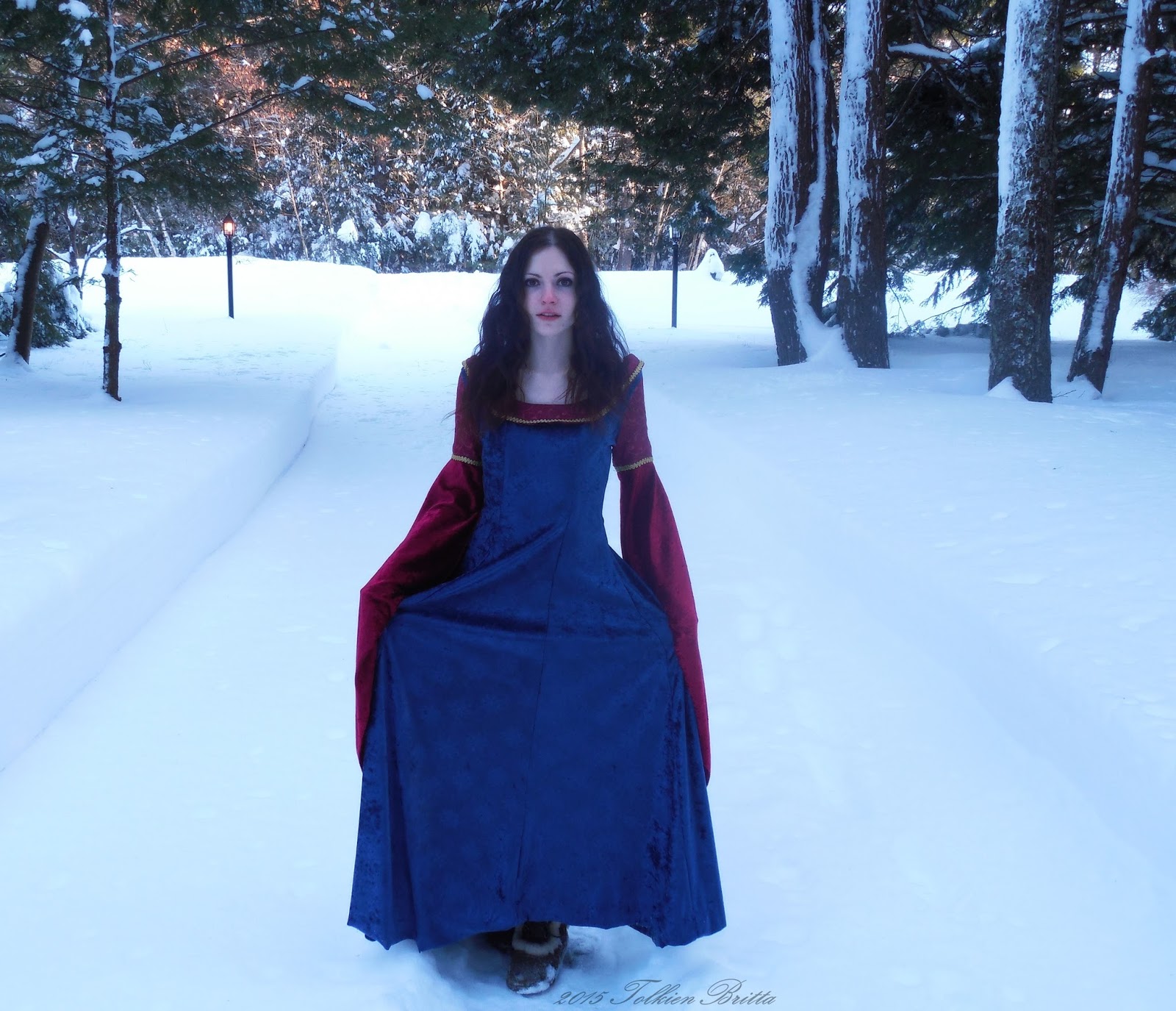 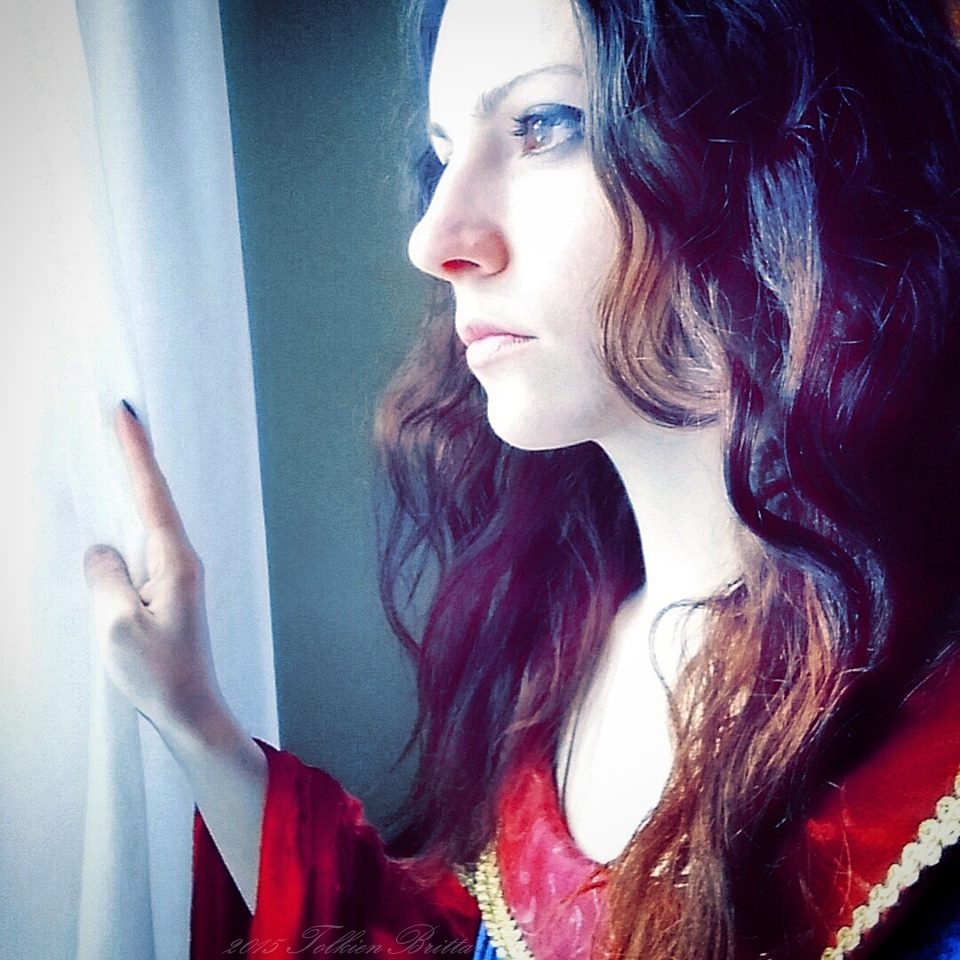 It's been awhile since I've posted anything of real sustenance on this blog, and for that I apologise. As I've said, I hope to get back into serious Tolkien blogging this year. Additionally, I am hoping to dive more deeply into Tolkien cosplay, sso I thought I would talk a bit about that today.

For the longest time, my focus has primarily been on Arwen, as I find I identify with her character most (at least in terms of appearance; I don't know if I could pull of blond well enough to attempt Galadriel or Éowyn). But I've always been a huge fan of Rohan and its people, so I would love to have a go at being a shield-maiden. One of the dresses I've had my heart set on making is Éowyn's Green Dress:

I'd also like to make another of Arwen's dresses from the films – either her Requiem Gown or Mourning Dress; but aside from these, I'd love to start working on my own interpretations of characters, such as Queen Berúthiel, Lúthien Tinúviel, or even something more generic, like a random Elf, Dwarf, Black Númenórean, or even Beorning (I think a Beorning costume would be so much fun to make).

And then I'd also like to try my hand at some LOTRO-inspired costumes, based either on my own characters or some NPCs in the game.

I'm going to start drawing up some designs and looking at fabrics/etc. so I can hopefully have one or two of these outfits done in time for this year's conventions. If you have any suggestions, tips, or any other kind of feedback, please don't hesitate to let me know! I always appreciate input from others.
Posted: 3:05 PM No comments:

On this day in the year 3019 of the Third Age, the Fellowship rests in Lothlórien. Their wounds and fatigue are healed, but the loss of Gandalf becomes more apparent. The Elves of Lothlórien sing songs of lamentation for the fallen wizard; Legolas does not interpret these laments for the rest of the Company, saying he has neither the skill nor the heart to do so.
Posted: 9:59 AM No comments:

On this day in the year 3019 of the Third Age, Gandalf fights the Balrog atop Zirakzigil in what is known as the Battle of the Peak. The two remain engaged in battle for two days before Gandalf finally throws down his enemy (January 25), which breaks the side of the mountain as it falls; Durin's Tower and the Endless Stair are destroyed in the process. Darkness takes Gandalf, and he passes away.
Posted: 11:28 AM No comments:

On this day in the year 3019 of the Third Age, the Fellowship are led, blindfolded, to Caras Galadhon by Haldir. Frodo and his companions are introduced to the Lord and Lady, Celeborn and Galadriel, and Aragorn recounts their adventures to their hosts.
Posted: 12:24 PM 1 comment:

On this day in the year 3019 of the Third Age, the Fellowship reaches the Bridge of Khazad-dûm, where Gandalf falls after a confrontation with the Balrog. The Fellowship continues on and reaches Nimrodel late at night.
Posted: 6:47 PM No comments:

On this day in the year 3019 of the Third Age, the Company reaches the West-gate of Moria, where Frodo is attacked by the Watcher in the Water. Meanwhile, Gollum begins to follow the trail of the Ringbearer.
Posted: 1:58 PM No comments:

Last night, I found a few things I didn't have: the Hobbit Mirkwood heroes pack from the Bridge Direct (I passed, because I'm not a fan of those figures at all) and two action figures from The Two Towers: King Théoden and a Gondorian Ranger. I wasn't sure if I had either, but when in doubt, I just go ahead and buy! 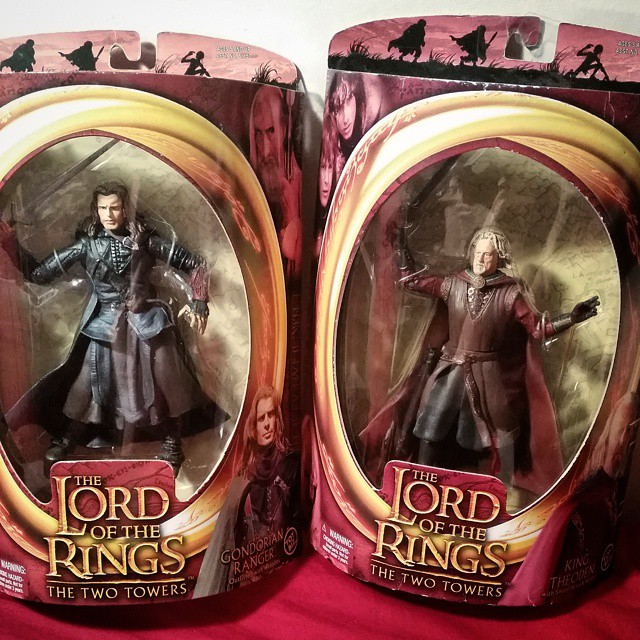 Hallmark was having a 75% off sale, and I ended up getting the Thorin Oakenshield ornament for $4! (I'm still not a huge fan of the Hobbit films, but I already have the LOTR Hallmark ornaments...) 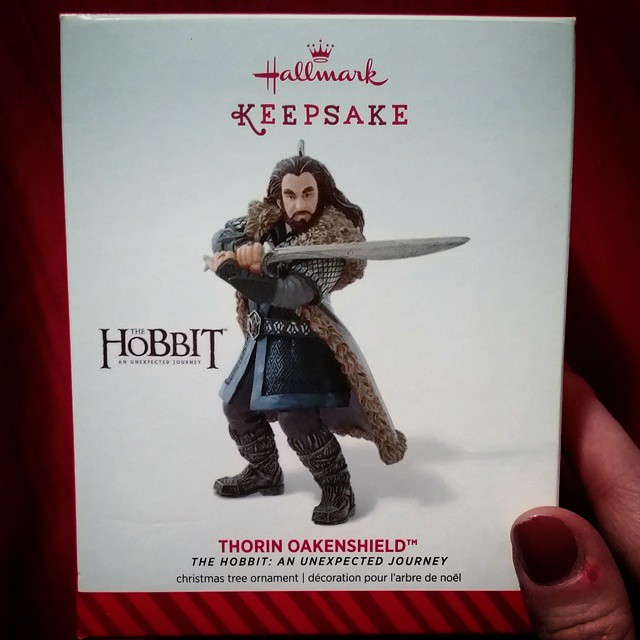 And last, but certainly not least, calendars were also 75% off, so I grabbed two more movie ones: 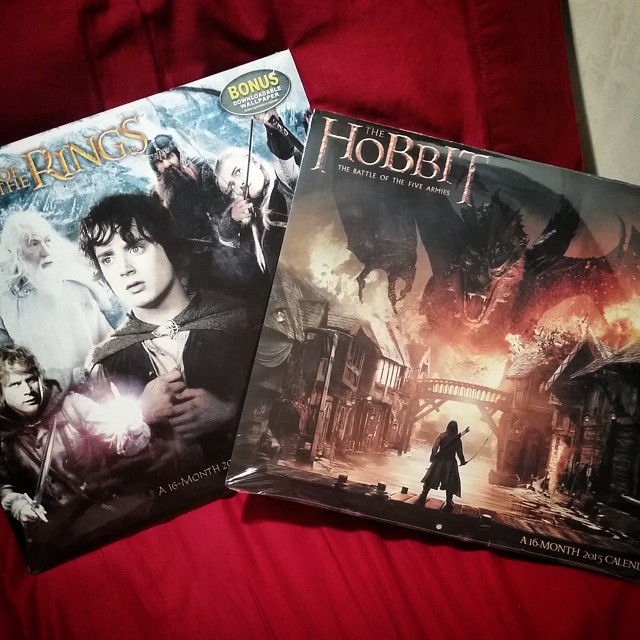 In 2015, LOTRO's story will continue through Osgiliath and Minas Tirith – the latter being my ultimate "must-see" location. In addition to these new areas, several updates throughout the year will bring players closer to the Ephel Dúath and the dark land of Mordor.

Some other items and initiatives addressed in the producer's letter are:
You can read the full letter here and visit the thread in the LOTRO Forums.

A (belated) Happy New Year to you all! I hope everyone has had a joyous and relaxing holiday season. Now that the madness has died down, I expect to return to blogging as vigorously as I used to. For my first post, I thought I would follow last year's trend of posting my very first Tolkien haul of the year.

As you probably read in my previous post, I spoiled myself with a silver version of the One Ring – and I was so impressed when it arrived that I immediately purchased another gift for myself from Badali Jewelry: Thrór's Key in bronze (http://badalijewelry.com/The-Hobbit/The-Hobbit-Necklaces/Bronze-Thr-r-s-Key-Necklace.html).

I absolutely love ordering from Badali Jewelry/My Precious Fantasy Webshop because they draw inspiration from Tolkien's books, rather than Peter Jackson's films; and I love their interpretations of various items (Badali also offers the Elfstone, an Arkenstone replica, the emeralds of Girion, and more). Of course, the key will not be my last purchase from them – I do have a birthday coming up, so I've already started dropping hints to friends and family!

I also made another attempt to order a set of The Lord of the Rings I'd been dying to get my hands on: the 1965 editions with covers by Barba Remington. I've been a Tolkien lover for over a decade now, but was never brought up on Tolkien; thus, finding editions dating earlier than the 1970s has often proved challenging for me (at least in terms of searching in used book stores and not wanting to pay a fortune just yet). I tried to order this set once before, but received a completely different set (which, fortunately, I didn't have, so I ended up keeping it). I took another chance, and this time I got what I wanted! 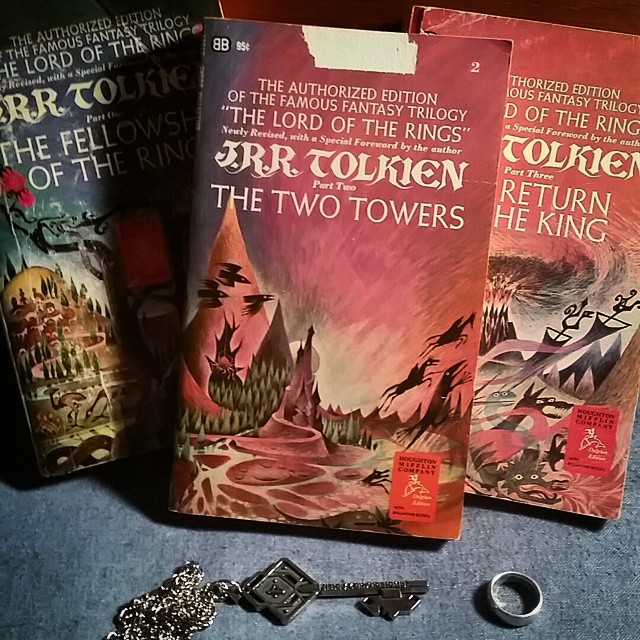 It is January 3 again – aka the Professor's birthday! We honour him on this day with a birthday toast, a custom started by the Tolkien Society:


At 9pm your local time, we invite Tolkien fans to raise a glass and toast the birthday of this much loved author. The toast is simply: The Professor!

So how perfect is it that this #LOTR set – the one I have most desperately wanted – arrived on Tolkien's 123rd birthday! I am beyond ecstatic to finally have these in my Tolkien collection! Happy Birthday, Professor! 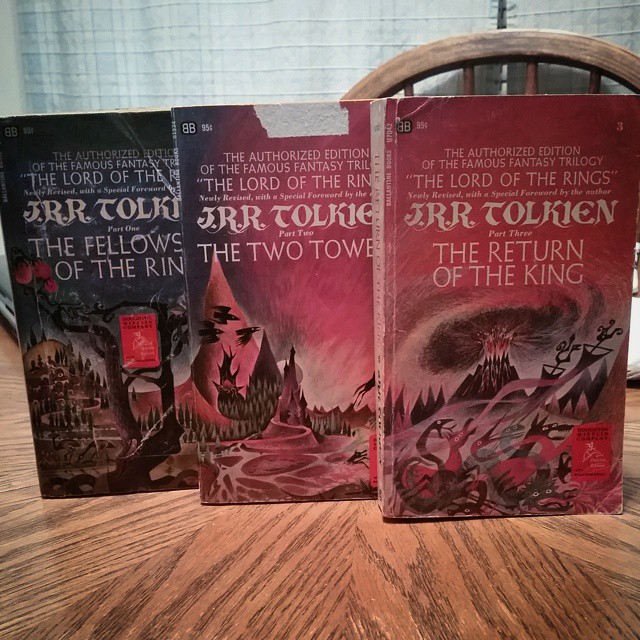 I've also decked myself out in all of my Tolkien (book and film) inspired jewellery; I will be toasting this evening at 9pm with a glass of Crispin's hard apple cider. 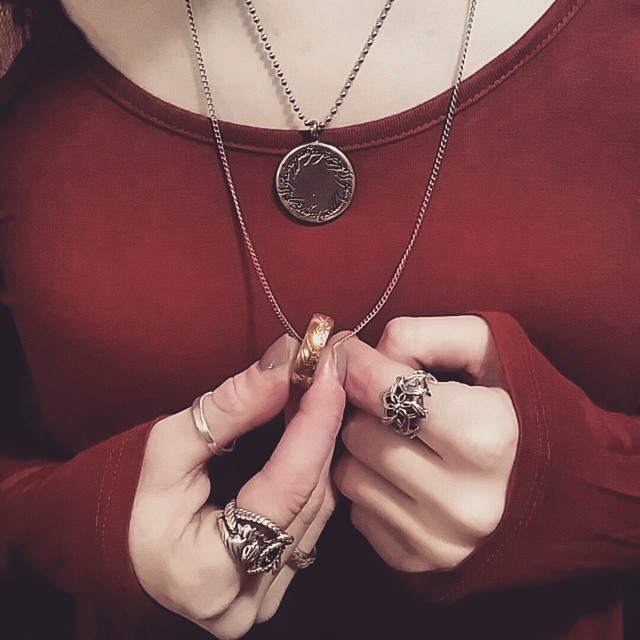